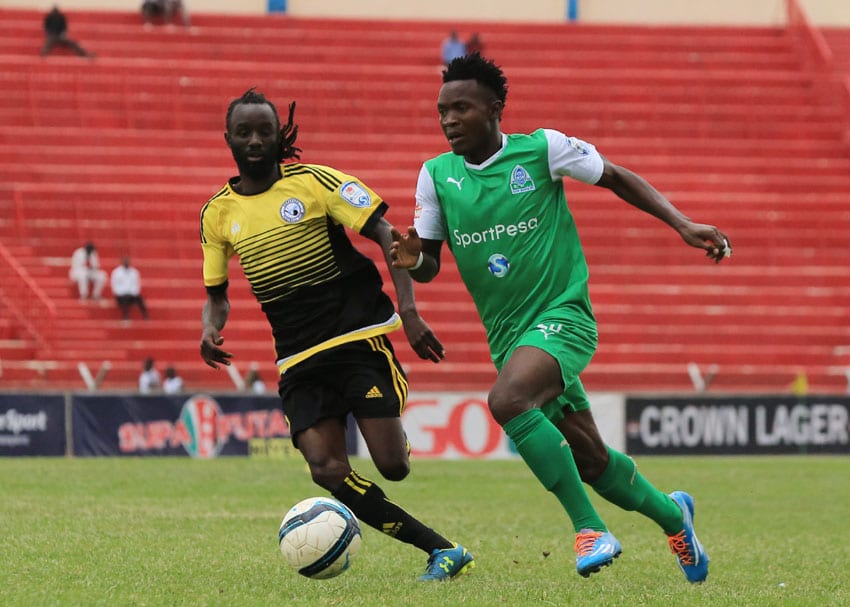 Basement side Sofapaka FC dented Kenyan Premier League (KPL) champions, Gor Mahia’s aspirations of retaining their crown when they forced them into a barren stalemate at Nyayo Stadium in Nairobi on Sunday.

Elsewhere, Victor Ademba gave visiting Sony Sugar a 26th minute lead at Thika United but the hosts forced a share of the spoils when Musa Saad equalised in the 76th to leave the sugar millers tenth (32), three places above their opponents.

The result at Nyayo handed the initiative in the title chase back to leaders Tusker FC who are now four clear at the summit on 48 points with five games to go in an encounter where Sofapaka goalkeeper, Mathias Kigonya, produced a man-of-the-match performance to thwart K’Ogalo.

“We closed Gor at the centre because we knew that is where the danger was. My players had four clear chances of hitting them on the counter but failed to score. We are optimistic we will survive, this was an important match that I believe will inspire my team to fight on in the remaining five matches,” satisfied Sofapaka boss, David Ouma, who returned to the side after his engagements with Harambee Starlets said.

“My return adds something but I want to thank my technical bench for the job they have done in my absence. We own the results as a group whether I’m present or not,” Ouma added.

His team inched to within a point of second from bottom Nairobi City Stars with 16, eight behind Ushuru FC who occupy the last slot to escape the chop.

Gor boss, Marcelo ‘Ze Maria’ Ferreira was too distraught to speak to the media after honouring his obligations with broadcast sponsors as he rued a missed opportunity to turn the pressure on Tusker who won 2-1 on Friday.

Field captain, Musa Mohammed who was marking his record 250th appearance for Gor set the tone for a frustrating afternoon for Gor when he failed to hit the target when a pin-point free kick from the returning Eric ‘Marcelo’ Ouma in the second minute.

Eric Ochieng, who crossed over from Gor to Sofapaka in June then tested Boniface Oluoch with a free-kick in the ninth, before floating another set piece delivery two minutes later but defender Abouba Sibomana got the better of Johnson Baagole in an aerial contest to avert danger.

Ouma then wasted two chances in quick succession, his first shot from close range was denied by the keeper when Gor raced to the other end after being put through goal by a glorious cross from Karim Nzigiyamana before he failed to turn in a George ‘Blackberry’ Odhiambo pass across goal in the 19th.

Jacques Tuyisenge then almost gave the title-holders the lead in the 23rd, Nzigiyamana crossing to him from the right only to be denied by Kigonya as he prepared to pull the trigger.

In the 35th, Tuyisenge’s header flew just over with Kigonya beaten, after he was set up by Francis Kahata.

On the stroke of the half time, Kigonya blunder almost gifted Gor the opener in the only blot to his commanding shift between the sticks after he needlessly handled the ball just outside the box.

The resultant free-kick was blocked by Francis Kentile and the whistle blew for half time before Earnest Wendo could convert the rebound much to the chagrin of K’Ogalo players.

At the restart, Ouma introduced Charles Melubo for Fredrick Ojwang and the new man saved his side when he deflected Kahata’s shot that was flying in out for a fruitless corner.

Gor pinned Batoto ba Mungu in their own half with Meddie Kagere who was playing on the right flank in the first half joining Tuyisenge in a central forward role as Ze Maria switched to a two-pronged attack.

The former Brazilian international then introduced exciting youngster, Amos Nondi resting Sibomana with the new man paving way for Odhiambo to switch flanks to the left as Ouma dropped to defence.

Gor’s all out attack was almost caught out cold in the 67th when Salim Gichuki stole the ball from Nzigiyamana and quickly crossed to the unmarked Melubo who spurned the chance by firing straight to the under employed Olouch.

Ze Maria then hauled off Odhiambo for Ugandan Godfrey Walusimbi, before finally withdrawing Nzigiyamana for former Sofapaka man Enoch Agwanda in a last ditch effort to find a breakthrough.

Agwanda’s corner in the 85th found Mohammed in the box but the skipper was denied the headlines when his finish cannoned off the cross bar in what was the last clear cut opportunity for the champions to grab victory.

K’Ogalo’s profligacy returned to haunt them after successive wins reignited their challenge after cutting down a seven-point lead to two in what was their sixth draw in eight KPL games.