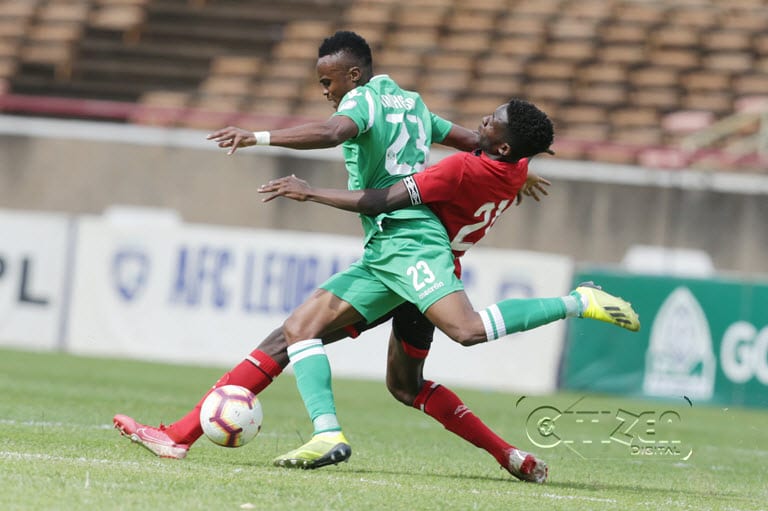 There was nothing out of the ordinary in the 88th Mashemeji Derby at least for the followers who have been keen on Gor Mahia and AFC Leopards since 2016.

In fact it can aptly be termed a one sided affair, without any bias, as Gor have won the last nine meetings against their eternal rivals.

In the run up to the Sunday clash, there was every indication of the Andre Casa Mbungo coached Leopards halting their losing streak to Ingwe, but it was not to be.

Gor, fresh from suffering the shame of exiting the Confederation Cup at the preliminary level in the hands of DC Motema Pembe, a lower tier of their CAF Champions League status after heroic show last term that saw them reach the Cup quarters were keen to right the wrongs moreso after losing 1-0 to Mathare United, their first domestic loss this season, just a four days before facing Ingwe.

On the other hand, Leopards have had found some self-believe brought about by some good signings and a good run in the league. Their last season defeats were blamed on poor goalkeeping and primary school-boy defending. Therein lacked ambition and respect for the jersey by the crop of the players in the squad, as put by the club’s hierarchy- that has partly changed though this term.

So, on Sunday, there was Benjamin Ochan between the sticks, the man whose record so far at Ingwe, least to say, is admirable. There was no Gabriel Andika or Lucas Indeche. There was a solid Soter Kayumba in the defence, not the dangerously inconsistent Salim Abdallah. There was John Mark Makwatta in the attack, the best player according to Sports Journalists Association of Kenya in the first and second months of the league this season, and not Henry Uche the joker!

Second on the log with as much points as Gor before the clash, with a better spirit to overcome the financial woes that both sides are facing, Leopards had a chance on paper.

History was not about to twist, not on such an auspicious occasion. Doing so would probably make Mahia, fabled magician Gor is named after, turn in his grave if K’Ogalo were to lose to the old enemy!

It was not Meddie Kagere, It was not Jacques Tuyisenge to the job. There was no Francis Kahata to thread the impeccable passes in his natural wit and skill, but the gulf in class was evident.

Clearly, Mbungo lacked the tactical response to Gor’s match approach. He was killed in his major strengths. While he chose to play with Makwatta as the main man upfront, he failed to realise early enough that nothing much would have come from the short striker manned by Joash Onyango and Charles Momanyi as the two enjoyed height advantage over the former.

Worst still, most of the crosses sent to Makwatta were aerial, denying him perfect opportunities to strike.

With Makwatta caged, the flankers should have done better to diversify the risk. Hansel Ochineng did not appear to be at his best especially in the second half, on the left. Neither was Whyvonne Isuza causing meaningful impact in the middle, and Yikpe’s first goal extinguished the fire in their belly, if at all there was any.

Poignantly, Bernard Ondiek was superb in his unusual role as a full-back. The Gor Mahia attacker was trusted on the right-back in the absence of Wellington Ochieng, who has been playing in the position since Harambee Stars man Philemon Otieno got injured.

How he was able to stop Ochieng (Hansel), is a key highlight of the derby.

Pollack knew how to terrorise from four men. Francis Afriye was menacing all through,  and so was Yikpe. Miheso was running in crosses and attempted to score too.

This left Leopards with no key player to police-mark. And, when he had four goals, bringing on Joachim Oluoch, a defender, for Muguna, a creative midfielder, he finished it all.

“I don’t have words to explain the feeling. They (Leopards) were not weak at all. The first half was an almost balanced affair. We (Gor) positioned ourselves in a better way  and after the break we didn’t waste those chances. It is amazing to win a derby this way, just in style,” an elated Polack said after the match.

Mbungo was humble enough to accept Gor outclassed them after the match. “We (Leopards) lost the rhythm within a short time and they exploited that. They were sure of where to press and for sure they were better in the second half,” a crestfallen Mbungo said.

Yikpe could not hide his joy, saying he now wants the Golden Boot at the end of the season. “It has taken time for me to shrug off the injury. I’m now fully fit and I want to keep on scoring. My target is to be the top scorer.”

Juma was happy that he scored in the derby, and wants to take the form to the national team.

“It feels good to score in a big match like this. I hope to continue doing better even in the national team. There is a real chance to do well both at club and national team levels as it is now,” the youthful midfielder said.

With the continental journey now over for K’Ogalo, the only business at hand is the Kenyan Premier League (KPL) title defence and the FA Cup pursuit.

If the ruthless style the 18-time KPL champions applied to clobber their in-laws is anything to go by, the 19th title could just be an obvious addition in waiting.

Ingwe, under their former player and title winner Dr. Dan Shikanda, on the other hand, have a realistic chance of doing well and win something this season.

How fast they recover from the humiliation of the year will count.