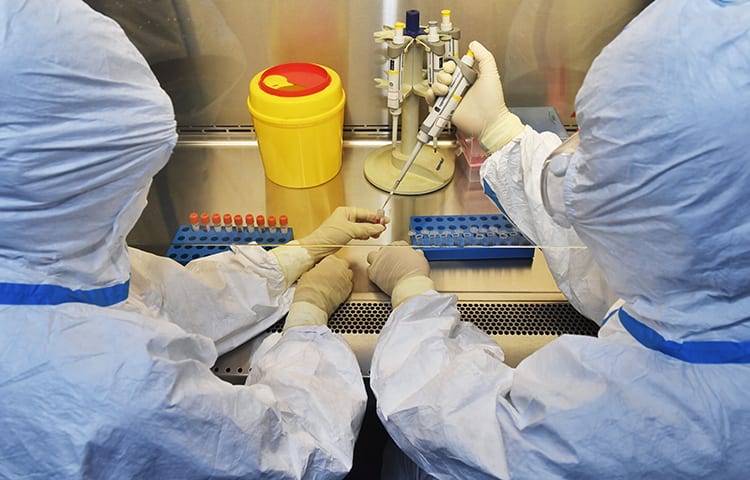 The head of the World Health Organization (WHO) said that public health officials are operating in “unchartered territory” as they combat the spread of the novel coronavirus, which has infected more than 90,000 people across 73 countries and territories as of Monday evening.

The virus has spread to every continent except Antarctica since it was first identified in December last year in the central Chinese city of Wuhan. Medical workers are now battling deadly outbreak clusters in South Korea, Iran and Italy, while other countries are working furiously to avoid a similar fate by readying public health authorities, alerting their citizens and enacting travel restrictions to affected areas.

To date, there have been 172 deaths reported outside mainland China, raising the global death toll to 3,115.

Several nations that have seen cases are putting in place measures to limit the virus’ spread: closing schools, encouraging remote work and canceling or scaling back public events, just to name a few.

The WHO has so far held off on classifying the incident as a global pandemic, but has warned it is a possibility in the near future.

“We have never before seen a respiratory pathogen that is capable of community transmission, but which can also be contained with the right measures,” said Dr. Tedros Adhanom Ghebreyesus, the director-general of the global health watchdog.

We are in unchartered territory with #COVID19. We have never before seen a respiratory pathogen that is capable of community transmission, but which can also be contained with the right measures.

Investors are also bracing for the possibility that the spread of COVID-19, as the virus is formally known, could throw the global economy into recession. Its spread in China, the world’s second-biggest economy and a major manufacturer, was followed by factory closures that severely impacted global supply chains.

At least 80,151 cases have been identified in mainland China to date, killing 2,943 people.

However, the economic effects of the virus now go beyond China, as the virus is impacting business operations and consumer behavior worldwide. The Organization for Economic Cooperation and Development warned

Monday that the virus plunged the world economy into its worst downturn since the 2009 global financial crisis and that growth could be cut in half if the outbreak continues unabated.
Major clusters outside China

Cases outside mainland China appear to be spreading faster than inside, as the outbreak shows signs of stabilizing in parts of the country, following weeks of restrictions and emergency measures. The WHO’s

Ghebreyesus said on Monday that “in the last 24 hours, there were almost nine times more COVID-19 cases reported outside China than inside.”

According to China’s National Health Commission (NHC) confirmed cases in mainland China increased by 125 Monday. Of those cases, 114 were in Hubei, of which Wuhan is the provincial capital.

South Korea, Iran and Italy are facing the most severe outbreaks excluding mainland China. Authorities in Seoul said Tuesday that more than 4,800 infections had been identified, killing 28 people. Italian officials have reported at least 1,835 infected patients and 52 deaths. And Iran has announced at least 1,500 cases and 66 deaths — including an adviser to Supreme Leader Ayatollah Ali Khamenei.

Several of Iran’s neighbors have taken steps to avoid the spread, including closing borders with the country.

Authorities in Europe are also taking early precautions. Several governments are preventing large gatherings of people in order to curb community transmission, as well as closing public spaces like the Louvre in Paris and Milan’s La Scala opera. Crowded events like the Paris half-marathon have been canceled. And one French official advised against a long-time French greeting of two kisses on the cheek to avoid close physical contact.

The European Union’s alert level for the novel coronavirus has been raised from moderate to high, European Commission President Ursula von der Leyen said at a Monday news conference. There are more than 2,000 confirmed cases in the EU, with the bulk of the outbreak happening in Italy.

The United States has also seen an uptick in cases, with more than 100 infections now identified after a surge of new patients Washington state, where six people have been killed. Four of the people who died were residents of a nursing care facility in Kirkland, in suburban Seattle, eliciting concerns that the virus may have spread within Washington in recent days or weeks.

Washington remains the only state in the US where the spread of the virus has resulted in fatalities.

The new cases have prompted private companies to take their own proactive measures. Twitter is asking its employees to work from home, Carnival Cruise lines is changing some of its itineraries and the NBA is asking its players to avoid taking items from fans to autograph and offer strangers fist-bumps instead of high-fives.

President Donald Trump said Monday he was still considering additional travel restrictions from countries with rampant coronavirus outbreaks. Vice President Mike Pence, who was appointed to the head of President

But he also advised Americans that the virus does not pose a major threat to them.

“Let’s be clear: The risk to the American people of the coronavirus remains low, according to all of the experts that we are working with across the government,” Pence said.