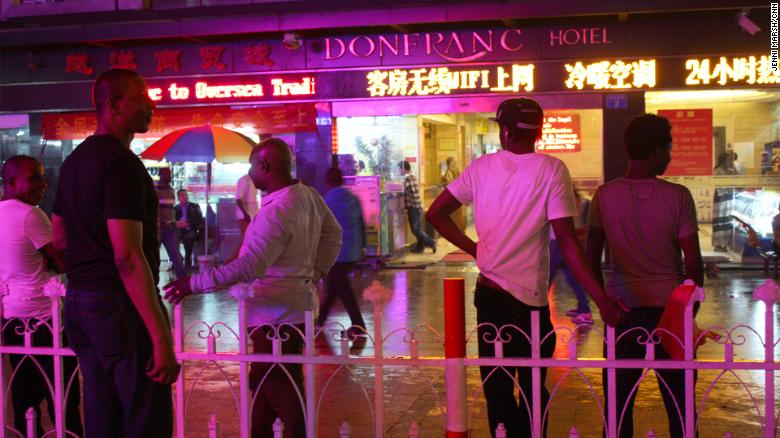 The African community in Guangzhou is on edge after widespread accounts were shared on social media of people being left homeless this week, as China’s warnings against imported coronavirus cases stoke anti-foreigner sentiment.

In the southern Chinese city, Africans have been evicted from their homes by landlords and turned away from hotels, despite many claiming to have no recent travel history or known contact with Covid-19 patients.

CNN interviewed more than two dozen Africans living in Guangzhou many of whom told of the same experiences: being left without a home, being subject to random testing for Covid-19, and being quarantined for 14 days in their homes, despite having no symptoms or contact with known patients.

Health authorities in Guangdong ​province and the Guangzhou Public Security Bureau did not respond to CNN’s request for comment.

The move comes amid heightened media coverage of the so-called second wave of coronavirus cases, emanating from infections outside of China.

On Thursday afternoon, Chinese Foreign Ministry spokesman Zhao Lijian said: “Since the beginning of the coronavirus outbreak, China and African countries have always supported each other and have always fought against the virus jointly.

“I would like to emphasize that the Chinese government treats all foreigners in China equally, opposes any differentiated practices targeted at specific groups of people, and has zero tolerance for discriminatory words and actions.”

Guangzhou has long had the largest African community in China.

Because many Africans in the city have short-term business visas, they travel into China several times a year, making it difficult to calculate the size of the African population the city.

But in 2017, approximately 320,000 Africans entered or left China through Guangzhou, according to Xinhua.

African residents say local hostility to their presence is nothing new. But when coronavirus cases emerged in the African community this month it served to amplify existing tensions.

A report on April 4 alleged that a Nigerian national with Covid-19 had attacked a Chinese nurse who tried to stop him leaving an isolation ward at a Guangzhou hospital​.

The report was shared widely on social media, and local Africans CNN spoke to say a racist backlash against the African community ​followed.

Then on April 7, Guangzhou authorities said five Nigerians had tested positive for Covid-19.

Fearing a cluster among the African community, Guangzhou authorities upgraded the risk level of Yuexiu and Baiyun, the areas home to the city’s two African enclaves, from low to medium, state-owned Global Times reported.

​The local government Tuesday reported 111 imported cases of Covid-19 in Guangzhou, with 28 patients from the UK and 18 from the US.

But in interviews with CNN, Americans and British nationals in Guangzhou said they had not heard reports of forced testing, home evictions and additional quarantine measures being imposed on members of their communities.

On March 21, Nigerian goods trader Chuk, who did not want to use his full name for fear of government reprisals, flew back to Guangzhou, his home since 2009. With China’s coronavirus cases seemingly under control, he wanted to resume his trading business, which had been stymied by the pandemic.

The area around Guangzhou is a manufacturing heartland, where many Africans buy cheap goods to sell back home.

Chuk returned seven days before China closed its borders to most foreign nationals, but upon arrival, he says he was told that he needed to enter government quarantine at a hotel for two weeks.
As a trader, Chuk travels frequently, and is accustomed to staying in hotels during his time in China.

But on Tuesday, Chuk says that when he was released, along with about 15 other Africans, with a clean bill of health, they effectively became homeless.

“We went to the hotel with the certificate, but we were rejected,” he said. The group went to the police station to report that hotels were refusing to let Africans stay, but “they refused to talk to us.”

The Guangzhou Public Security Bureau, which oversees the police, did not respond to CNN’s request for comment about events described by anyone CNN interviewed.

Chuk says he had no choice but to sleep rough for two nights, before finding a friend’s couch to crash on. “Rain fell that day and the next and we were all drenched and our belongings soaked,” he said.

His story was echoed by others who spoke to CNN.

Earlier this week, images began circulating online of rows of Africans sleeping on the streets of Guangzhou, beside their luggage, having either been evicted from their apartments or been turned away from hotels. Other videos showed police harassing Africans on the street.

On Thursday, CNN called 12 hotels in Guangzhou, wanting to book a room for an African guest, and was informed by 10 that they would not be “accepting foreign guests anymore.”

Meanwhile, multiple Africans CNN spoke to reported being abruptly evicted from their homes.

No one had evidence of a government directive asking landlords or hotels to turn away or reject foreigners. Rather, they say, these appeared to be decisions made by private individuals and business owners.

On Wednesday, Nigerian trader Nonso, whose name has been changed to protect his identity due to fear of government reprisals, says he and his girlfriend received a message from their landlord at 7 p.m. on WeChat, a Chinese messaging app, saying they needed to vacate their flat by 8 p.m.. “I told him I can’t vacate in one hour,” said Nonso, who pays 1,500 yuan ($212) a month for his apartment in the Nanhai, on the outskirts of Guangzhou, and has lived in China for three years.

At 10 p.m. he says his landlord came to the flat and cut off the electricity and water supply.

“I asked them, what did I do? I’ve paid rent until September with two months’ deposit. They didn’t give me any reason,” he said.

Nonso called the police, who let them ​remain in the apartment for the night. But in the morning, ​Nonso says the landlord returned with a different officer, who said he had to leave. ​Nonso says he has struggled to find a new apartment to rent. “We have contacted a lot of agents none of them are leasing to black foreigners,” he said.

Chris Leslie, also from Nigeria, said he was abruptly evicted from his Guangzhou apartment on Thursday, despite not defaulting on his rent and having a valid contract. He had nowhere to sleep that night.

“I will just hang out outside,” he said. “It is so pathetic. In a country where people don’t accept you and they criticize, this is just a bitter humiliation. The most important thing is having somewhere to sleep.”

On Thursday, several volunteer groups emerged on WeChat, mostly populated by scores of other foreigners, rallying around the displaced Africans, organizing food, masks and sanitation products for those left wandering the streets of Guangzhou without a bed.

Katie Smith, an American living in Guangzhou with her Moroccan boyfriend, made two deliveries to newly homeless Africans on Thursday. Her name has been changed to protect her identity, as she, too, fears reprisal from local authorities.

“As we drove down the street we saw a lot of Africans walking around,” said Smith. “The police came and said they couldn’t stay there. They’re not letting them gather in groups. So they’re just walking up and down the streets with nowhere to go.”

Videos filmed by a member of one of the WeChat volunteer groups, seen by CNN, shows police trying to prevent volunteers from helping the Africans.

“As a black person living in China right now it’s pretty scary,” said one volunteer who didn’t want their name to be reported for similar reasons, said via WeChat. “Don’t use the African/black community as a scapegoat for the virus.”

The five Nigerians confirmed to have Covid-19 had been to eight restaurants, nine hotels and 12 public places before testing positive, according to the state-run Global Times.

Since then, Africans across Guangdong province have reported being tested in their homes, despite having no recent travel history or contact with a Covid-19 patient.

Maano Gaasite, an international student from Botswana at a Guangzhou university, said that at 3 p.m. on Sunday she received a WeChat message from her course administrator saying she needed to be tested, despite having not left China for over six months.

“It was only when I got there I realized it was only African students. There are other students from India (in my halls of residence, but) they were all not there. Just our small community (of Africans),” she said. The officials took a swab from the back of her throat and said they would call if she had the virus. She never heard back.

As a student, Gaasite says she has no contact with the Nigerian trading community.

Meanwhile, in Shenzhen, a city about 140 kilometers (87 miles) south of Guangzhou, Youssouf, a Senegalese man who did not want to disclose his surname for security reasons, said that at 1 p.m. on Wednesday, the

Chinese authorities came to the apartment he shares with his Canadian wife in a compound with many foreign residents.

“They knocked on the door. A guy showed me his phone with my full address, my full name and my country,” said Youssouf. He told Youssouf to go to hospital by 5 p.m. to get tested. Youssouf asked if they also wanted to test his Canadian wife. Neither of the couple had left China in the past 12 months.

“They said, ‘No we are just testing Africans,'” Youssouf said. Canada has more than 20,000 confirmed cases of coronavirus and is on the Chinese Ministry of Foreign Affairs’ list of high-risk countries.

The Shenzhen municipal health commission did not respond to CNN’s request for comment.

“African people are not welcome in China. We’ve been discriminated against repeatedly,” he said.

Africans in China have long complained of racism, in the form of Chinese people holding their noses as they walk past, racially offensive adverts on television, and Chinese actors performing in blackface in a nationwide gala.

Earlier this year, when Beijing proposed changes to its immigration laws around permanent residency, a backlash emerged on Chinese social media site Weibo against Africans. Many of the comments have since been removed from the platform.