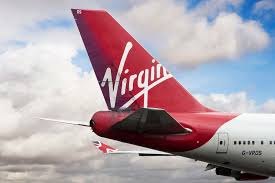 Virgin Atlantic flight headed to London from New York City was diverted to Boston after a small fire broke out in the first class cabin Thursday night, a passenger said.

The flight’s 217 passengers were safely evacuated after the emergency landing, the Massachusetts State Police said. It said the flames may have come from a passenger seat that had an electrical malfunction.
Passengers smelled smoke coming from the first class cabin “not even 30 minutes” after the plane departed John F. Kennedy International Airport around 7:30 p.m., said Cory Tanner, 28, who was aboard the flight.
The crew announced the aircraft would make an emergency landing in Boston’s Logan International Airport. Tanner said a flight attendant told him the smoke was from a TV unit that caught fire in the first class cabin.
In a statement, Virgin Atlantic Airways said an incident aboard the flight led to the plane being diverted as a precaution. It did not provide any details on the cause of the fire.
“Our cabin crew are trained to a high standard and acted quickly to deal with this situation,” the airline said.
Before the passengers deplaned, firefighters inspected the fire. “It was oddly calm,” Tanner said. “There was no big commotion.”
Passengers are waiting for a replacement aircraft.