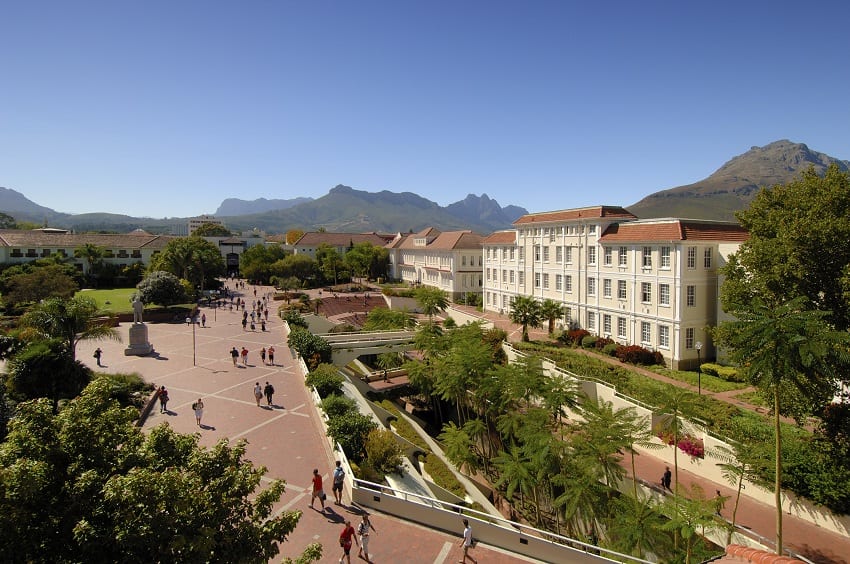 Students at South Africa’s Stellenbosch University are threatening to go beyond protest marches and seek a legal right to be taught in English rather than Afrikaans, the language they identify with apartheid.

Tensions at the campus, where professor Hendrik Verwoerd helped to define the racial ideology that he later turned into national policy, rose with the latest allegations of white privilege shaping South Africa’s rugby team.

Now students at Stellenbosch, north of Cape Town in prime vineyard country, are challenging the use in some courses of Afrikaans, a language born of Dutch settlement in South Africa in the 17th century.

Long identified with the racial classification which sought to split the black majority and forcibly remove people to ‘tribal homelands’, far from major cities and natural resources, Afrikaans is one of 11 official languages in South Africa.

Its dominance at Stellenbosch is seen as a stumbling block to academic success for those who don’t speak it at home, perpetuating inequality imposed on previous generations by restrictions on where people could live, work, go to school and own land.

Even those Afrikaans-speakers whom apartheid classified as Coloured, meaning mixed-race, support the fight for a choice.

“The majority of Coloured students at Stellenbosch university are Afrikaans-speaking and their preference is to be taught in Afrikaans,” Amy Meyer said, a Coloured student who regards her first language as English.

“However, there are many Coloured students who prefer to be taught in English and the fight is to be taught in a language of your preference and not have Afrikaans forced on you to achieve academic success,” Meyer said.

Race in education remains an emotive issue. Under white minority rule, which ended in 1994, blacks were relegated to sub-standard government schools designed to prepare them for little more than unskilled, manual labour. Many from the black majority were sent to the impoverished ‘homelands’ whose total land area covered barely a tenth of South Africa.

Besides seeking a revamp of Stellenbosch’s academic curricula and the restoration of a centre that monitored and advised university managers on equal opportunity policy, student activists want to use English as an equaliser.

“The end goal is the reformation of institutional culture, but how we get there is in fact through changing the language policy so that no student is forced to learn in Afrikaans and that all classes must be available in English,” Mohammad Shabangu, spokesman for the Open Stellenbosch group said.

Stellenbosch has produced prominent anti-apartheid figures, such as theologian Beyers Naude and many students who resisted conscription to the army when it was being used to quell black protest in the 1980s.

In response to the latest protests, the university says it allows a multilingual approach where Afrikaans is used as an academic language, alongside English.