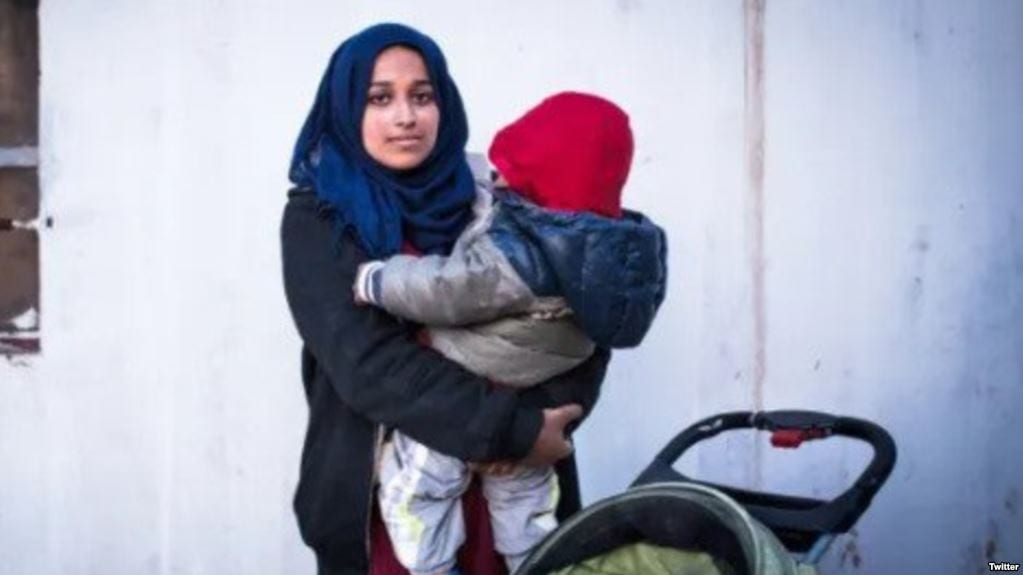 A few years ago, Hoda Muthana was a hard-talking 20-something from a religiously conservative Alabama family, with a propensity for aggressive tweets and an affinity for the Islamic State’s extremist rhetoric.

Now she’s the subject of a tweet by U.S. President Donald Trump, comments by the secretary of state, a federal lawsuit, and a broader debate around the world about how countries will handle extremist group fighters and supporters who want to repatriate.

The 24-year-old followed IS rhetoric online from her home state of Alabama, then all the way to the burgeoning caliphate in Syria, where she moved in 2014.

But she’s changed, she says. She wants to come home to the country where she was born and raised, even if it means facing the legal consequences of joining IS. She wants to bring her nearly 2-year-old son back from the Kurdish-run refugee camp where they are currently being held in Syria.

The U.S. government wants nothing to do with her, though. In fact, the Trump administration — following paperwork initiated during President Barack Obama’s last term — says that despite a U.S. birth certificate and two passports, she was never a citizen.

“I have instructed Secretary of State Mike Pompeo, and he fully agrees, not to allow Hoda Muthana back into the Country!” Trump tweeted on Feb. 20, a day before Muthana’s father filed a lawsuit to allow his daughter to return.

“She’s not coming back,” Pompeo told Fox News on Sunday, repeating previous comments. He called her a “non-citizen terrorist” with “no legal basis for her claim of U.S. citizenship.”

Neither the president nor the secretary of state can unilaterally strip someone’s citizenship, says Muzaffar Chishti, a lawyer with the Migration Policy Institute. He and other immigration law experts told VOA that Muthana would likely be afforded due process, even if the government wants to assert that she never should have been given citizenship.

And that, Chishti says, will have to be played out in court before anyone — even the president — can officially say she cannot return.

“Of all the Western countries, the U.S. has become the most restrictive in allowing government to strip people of citizenship,” Chishti said. “(T)his will become an important case.”

What she did not do, according to her lawyer Charles Swift, is renounce her citizenship. That’s a formal and costly process that, while on the upswing in recent years, remains rare.

But the U.S. government says Muthana never was American, despite being issued two passports. According to Swift, and to documents filed in federal court by her father on Feb. 21, 2019, there is no doubt that Muthana was born in New Jersey, or raised in Alabama. Yes, the U.S. government admits, she was even issued valid passports.

​Despite that, the U.S. government has been claiming since 2016 that she was never entitled to U.S. citizenship, or to the passports issued to her. And at least on paper, thus far, the revocation of her citizenship status and passport is unrelated to her IS connection.

Instead, the case right now seems to hinge not on Muthana, but on her father, Ahmed Ali Muthana, who in the early 1990s was one of the highest-ranking Yemeni diplomats serving in his country’s delegation to the United Nations.

Much like now, Yemen in 1994 was a country divided, literally, by civil war.

Ahmed Ali Muthana served as the first secretary to Yemen’s U.N. mission in the United States from 1990 to 1994, according to federal court documents filed in his lawsuit against the U.S. government to secure the safe return of his daughter and grandson.

Most children born in the U.S. are citizens. The concept of birthright citizenship is enshrined in the 14th Amendment to the U.S. Constitution.

Children born to diplomats in the U.S. are exceptions, and that’s at the crux of the discrepancy between the government account of Hoda Muthana’s citizenship, and that of her family and lawyer.

According to Hoda Muthana’s father, with supporting documents filed in federal court, he was removed from his post at the U.N. shortly after the start of the civil war in Yemen that summer, with an effective termination date of Sept. 1, 1994. On that much, he and the U.S. government are in agreement.

Hoda Muthana would be born the following month to a mother who had already applied for her green card. This is where the U.S. splits off, claiming that while the termination date of Ahmed Ali Muthana’s employment was indeed Sept. 1, 1994, the “Host Country Affairs Section” of the U.S. Permanent Mission to the United Nations was not officially notified until Feb. 6, 1995 — months after Hoda Muthana’s birth on Oct. 28, 1994, in Hackensack, New Jersey.

The U.S. is claiming, because of that delayed notification to the U.S. mission, her father was still a diplomat when Hoda was born. That determination would mean she was not eligible for citizenship by birth, and never entitled to a U.S. passport.

But also included in the court documents is a 2004 letter from the U.S. Mission to the United Nations minister counselor of Host Country Affairs, to the Bureau of Citizenship and Immigration Services, that Ahmed Ali Muthana was recognized as a member of Yemen’s U.N. mission only until Sept. 1, 1994.

A U.S. State Department document revoking Hoda Muthana’s passport in 2016, addressed to her home in Alabama, came after she was already living among IS fighters. It makes no mention of her departure from the country, or her connection to the group. She had a right to a hearing at the time, but that expired 60 days after it was delivered. The agency revoked her passport based on a law that allows the government to do so if the passport was obtained “illegally, fraudulently or erroneously.”

The outcome of Hoda Muthana’s case affects not only her citizenship, but that of her son, whose father was a Tunisian IS fighter killed in action. If her U.S. citizenship is upheld, she would confer that status to the toddler. Without that, it is unclear what citizenship, if any, the boy could be granted, given that he was born to two foreigners in Syria, living in IS-controlled territory.

Hoda Muthana’s case may set precedents not just about the legal issue of revoking citizenship, but also about how the U.S. handles extremists who want to return.

The U.S. State Department on Feb. 4 called on “other nations to repatriate and prosecute their citizens detained by the [Syrian Democratic Forces].”

Ahmed Ali Muthana’s lawsuit leans on this as proof of a “specific [U.S.] policy position on the repatriation of American citizens who have previously been affiliated with ISIS,” an acronym for the militant group.

Trump also threatened in a Feb. 16 tweet that if European countries did not repatriate and prosecute its citizens held as foreign fighters in Syria, the U.S. “will be forced to release them.”

The U.S. is not alone in struggling over IS repatriation. The United Kingdom is locked in a similar debate and is likely to fail at barring one woman from returning.

“It’s very tempting to say, ‘Hey, you know, you went off and joined ISIS. Why should we ever take you back?’ Gosh, that’s extraordinarily tempting. Banishment is a very old punishment, except it’s not constitutional,” lawyer Swift told VOA’s Urdu service a day after filing a lawsuit against the U.S. government on behalf of Hoda Muthana’s father. “The Supreme Court has only permitted the loss of citizenship in extraordinarily limited circumstances that aren’t really present here. And it can’t be a punishment for your conduct.

“If America, with all its resources, cannot handle the risk posed by one young woman who has agreed to stand trial, then our security problems are indeed grave,” wrote Daniel Byman, a senior fellow at the Brookings Institution. That, in turn, could lead to expatriated extremists regrouping abroad.

Chishti, the MPI lawyer, agreed. “Even if (Hoda Muthana) were a former ISIS supporter and we are preventing her from returning, it sends the wrong signal, especially if she’s our citizen. … From a policy point of view, it makes most sense to have a program under which she could come here and be rehabilitated,” he said.