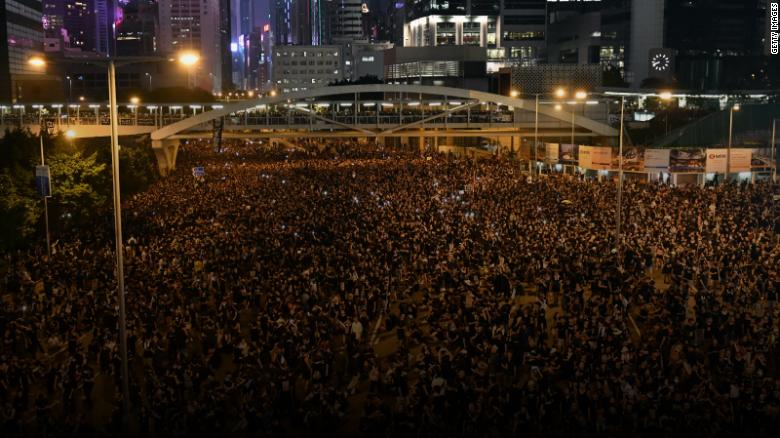 The US State Department hit out at China Thursday, accusing Beijing of behaving like a “thuggish regime” after the personal information of an American diplomat in Hong Kong, including the names of her children, was published by a pro-government newspaper.

China’s Ministry of Foreign Affairs said earlier that it had summoned “an officer at the US Consulate General in Hong Kong” after they held a meeting with local opposition figures it described as “Hong Kong independence” activists.

The move comes as Hong Kong enters its tenth weekend of increasingly violent, disruptive protests, which some in China have sought to blame on foreign forces.

In a statement, China’s foreign ministry said it had lodged “stern representations” with the consulate over the meeting, “expressing strong disapproval and firm opposition.”

Washington should “immediately make a clean break from anti-China forces who stir up trouble in Hong Kong, stop sending out wrong signals to violent offenders, refrain from meddling with Hong Kong affairs, and avoid going further down the wrong path,” the statement said.

The diplomat was identified as Julie Eadeh by pro-Beijing newspaper Ta Kung Pao, which has strong ties to the Chinese government. The paper published photos of Eadeh meeting with Hong Kong pro-democracy activist Joshua Wong and other members of his political party Demosisto, at a luxury hotel in the city. As well as identifying Eadeh, Ta Kung Pao also published the names of her husband and their young children.

The move was greeted by outrage in Washington, where State Department spokeswoman Morgan Ortagus accused China of behaving irresponsibly and “thuggishly.”

“I don’t think that leaking an American diplomat’s private information, pictures, names of their children — I don’t think that that’s a formal protest,” she said at a regular briefing Thursday. “That is what a thuggish regime would do. That’s not how a responsible nation would behave. Releasing any of that personal information of an American diplomat is completely unacceptable. That’s not a protest. That’s what a thuggish regime does, and it’s unacceptable.”

Ortagus said it was normal for US diplomats to meet with protesters and opposition figures, regardless of where they work.

“This literally happens in every single country in which an American embassy is present. So our diplomat was doing her job and we commend her for her work,” she said. “This is what not only American diplomats do, this is what other countries’ diplomats do.”

In response to Ortagus’ comments, a Chinese foreign ministry spokesman said her remarks were “blatant denigration and slander against China.”

“It shows the US gangster logic that calls white black, and the US hegemonic mindset which regards itself as the most superior,” the spokesman said. “The US isn’t reflecting or self-correcting, but made an unfounded counter-charge and venomously blamed China and made the groundless association that China leaked relevant information … It showed the dark and distorted mentality of the US.”

The spokesman added that “if you don’t want other people to know what you have done, just don’t do it.”

According to a State Department profile of her, Eadeh is a career member of the foreign service who has previously been stationed in China, Saudi Arabia and Iraq.

Wong and other members of Demosisto she was photographed meeting have previously met publicly with US officials including House Speaker Nancy Pelosi and Senator Marco Rubio. Wong’s party supports greater autonomy for Hong Kong but not full independence from China.

The latest meeting comes as China has ramped up blaming foreign forces, particularly Washington, for allegedly stirring up the protests. In a statement earlier this week, China’s foreign ministry said it was “exactly because of the open connivance and support by the foreign forces that the violent offenders have been further emboldened to defy the law.”

He claimed Eadeh was a “subversion expert at the State Department,” adding that “the Chinese people are not afraid of evil, nor are they afraid of causing trouble.”

Ip Kwok-him, a member of Carrie Lam’s executive council, also claimed this week that Hong Kong young people were not clever enough to be masterminding the protests and called on police to track down those “instigating and directing the unrest.”

However, a senior Hong Kong government official told CNN they had seen “no evidence” of any so-called “black hand” of foreign forces in the protests, and pointed to domestic concerns about political reform, lack of affordable housing and economic woes as the main drivers behind the ongoing crisis.