Uhuru on BBI letter : I’m in control of gov’t, I don’t need lecturing 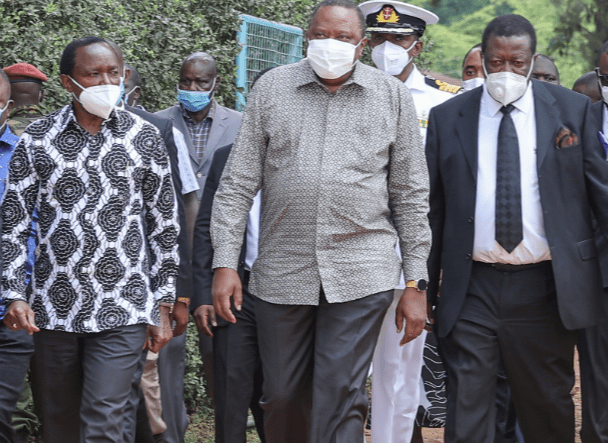 President Uhuru Kenyatta has dismissed the hustler vs dynasty politics, saying Kenyan leaders since independence have been elected by Kenyans and none were handed ‘lucrative positions’.

He also poured cold water on a viral letter whose contents had appeared to warn him that the BBI train risked tragic derailment in his Central Region home-turf.

Speaking during the burial of Musalia Mudavadi’s mother in Vihiga, President Uhuru dismissed the politics saying that he is in control of his government and in no need of ‘lecturing through letters from anyone’

He appeared to be replying to the contents of a controversial letter  on the BBI that had reportedly been authored by the Senate Majority Chief Whip Irungu Kangata.

He also dismissed the politics of dynasties and hustlers, saying that all Kenyan presidents before him pulled themselves up by their bootstraps.

Uhuru told critics who were complaining of ‘certain prominent Kenyan families’ in leadership to seek mandate from Kenyans, saying that Kenya as a democracy requires leaders to be elected.

“Leadership positions are not awarded, leaders are chosen by Kenyans, it is therefore wrong to, if you say you are tired, you are free to seek mandate from the people, let us respect each other as it is the only way to build a strong country ” he said.

He argued that if the same politics are to be applied, then Kenyans should also allow presidents from other communities as positions have been occupied by two tribes since Independence.

During the same address, Uhuru appeared to send a veiled warning to ‘rogue Jubilee troops’ undermining his mandate, alluding to a Swahili proverb that; ‘drenched in the rain, a Lion is still not a cat’

He explained that some of his critics who were enjoying their time in leadership were there courtesy of him.

Earlier in the day, his allies among them Kakamega Senator Cleophas Malala, Siaya Senator James Orengo and COTU Secretary General Francis Atwoli had asked Uhuru to bare his knuckles, and crack the whip on errant troops.