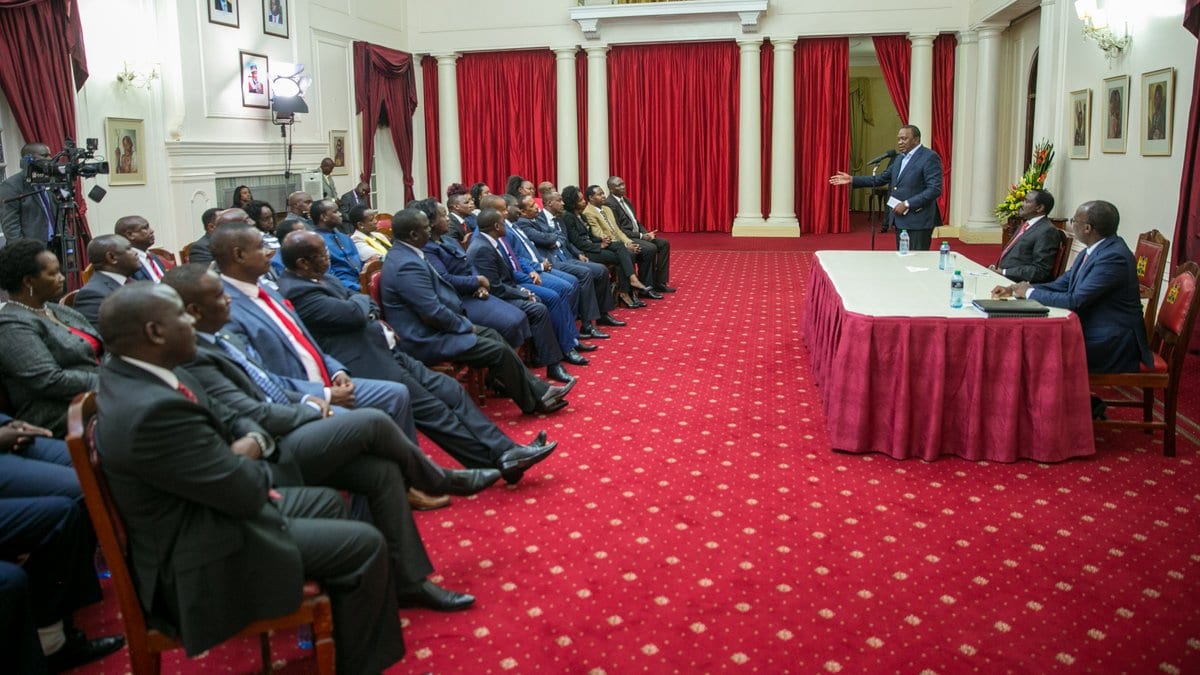 President Uhuru Kenyatta on Tuesday held talks focusing on development and the ‘Building Bridges’ initiative with leaders from five counties in Western Kenya as well as leaders from the Wiper Democratic Movement party.

The president first held lengthy discussions with leaders from Western Kenya where talks focused on the road map for  the realization of the Big-4 agenda, the fight against corruption and the building bridges initiative.

The leaders said they will support the government in achieving its development goals and in the ongoing fight against corruption and economic crimes.

The revival of sugar companies in Western Kenya was top of the agenda with President Kenyatta giving a one month deadline to a team working on a revival plan for Mumias and Nzoia sugar mills to complete their assignment and present the way forward.

“I am certain that within one month, we shall have the way forward on how to revamp the sector and where to invest more money,” said the President.

“We need a revival plan that works. We also need regulation that work. We cannot continue pumping money to the companies that goes to endless pits.”

The Head of State said the report on the revival of the sugar sector will provide a clear position on how to move the sector forward and how to assist sugarcane farmers.

“It is our own mismanagement that has resulted in this,” said Kenyatta, adding that the only intervention the government will address itself to urgently is the payment of farmers.

Former VP Awori, on his part, said corruption was the main reason for the collapse of the sector in the Western sugar belt while Mr. Wetangula called for a firm government policy that checks on imported maize and sugar to ensure cheap imports do not destabilize local production.

Later in the day, President Kenyatta hosted talks attended by all Wiper party leaders who pledged their full support for the ‘Building Bridges Initiative’ which seeks to unite all Kenyans.

Wiper boss Kalonzo Musyoka said the party leadership had passed a resolution to work with the government in the achievement of the Big 4 Agenda as well as supporting President Kenyatta in the fight against corruption.

Makueni Senator Mutula Kilonzo Jr said Kenyans fully appreciate the government’s development agenda as illustrated through the Big 4 Agenda including efforts being made towards the realization of Universal Health Coverage (UHC).

In his final remarks, President Kenyatta said: “Our politics has been toxic and poisonous for far too long.  We want to have competitive politics but we want to detoxify the politics.”

The Commander-in-Chief said unity is required to achieve the country’s socio-economic goals and thanked the Wiper party leaders for joining hands with him to drive forward Kenya’s development agenda.

The President said the Jubilee Government supports the idea of inclusivity of all Kenyans because unity is the best platform for a stronger nation.