Trump shares conspiracy theory on protester being shoved to the ground 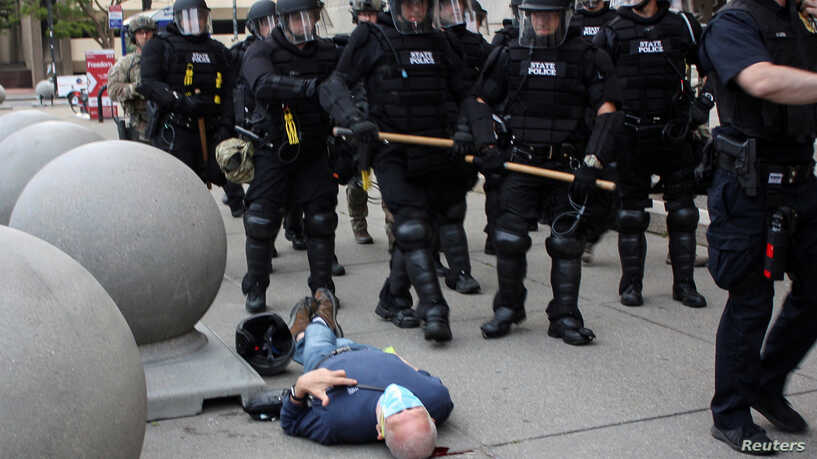 U.S. President Donald Trump on Tuesday shared an unfounded conspiracy theory suggesting that an older protester police pushed to the ground last week in Buffalo, New York, could have been an anti-fascist “provocateur” trying to disrupt police communications.

On Twitter, Trump repeated a version of the incident broadcast on the Trump-leaning One America News Network. “Buffalo protester shoved by Police could be an ANTIFA provocateur. 75 year old Martin Gugino was pushed away after appearing to scan police communications in order to black out the equipment.”

Trump added, “I watched, he fell harder than was pushed. Was aiming scanner. Could be a set up?”

A lawyer for Gugino, who remains hospitalized with a concussion, quickly condemned Trump’s tweet, saying it was “a dark, dangerous and untrue accusation” that the man had been part of a “set up” coordinated by anti-fascist demonstrators.

“Martin has always been a PEACEFUL protester because he cares about today’s society,” attorney Kelly Zarcone said. “He is also a typical Western New Yorker who loves his family. No one from law enforcement has suggested otherwise.”

Former Vice President Joe Biden, the presumptive Democratic presidential nominee, said his father used to say that abuse of power was the “worst sin there is.”

“Whether it is a police officer injuring a peaceful protester or a president defending him with a conspiracy theory seen on television (…) We cannot accept either,” Biden said.

“There’s no fact to any of it. He should apologize for that tweet. How reckless, how mean, how cruel,” Cuomo said.

Ari Fleischer, press secretary for former President George W. Bush, was among those who quickly reacted to Trump’s repeating the One America News story.

“The president’s penchant for trafficking in conspiracy theories is, politically speaking, going to ruin him. This is reckless. He doesn’t know when to stop,” Fleischer tweeted.

Two Buffalo police officers, Aaron Torgalski and Robert McCabe, were charged with assault after video of them shoving Gugino to the ground was widely shared on social media after he approached them last Friday during one of the dozens of U.S. protests against the May 25 death of George Floyd, a black man, while he was in police custody in Minneapolis, Minnesota.

Gugino staggered backward and fell on the sidewalk, suffering a concussion. Video showed numerous officers from the Buffalo Police Department’s Emergency Response Team walking past him as he lay motionless and bleeding.

The police department at first claimed Gugino “tripped and fell.”

News outlets reported that Gugino is a longtime peace activist in upstate New York, a member of PUSH Buffalo, which focuses on affordable housing, and the Western New York Peace Center, a human rights organization.

He is also active in the Catholic Worker Movement and frequently criticizes Trump on social media.

After the incident, Buffalo Mayor Byron Brown called Gugino an “agitator” who was “trying to spark up the crowd of people.”

When Torgalski and McCabe were suspended from the Buffalo police force and charged with assault, 57 of their colleagues on the city’s Emergency Response Team resigned from the squad in a show of support.

Trump has often blamed Antifa, an anti-fascist movement, as a domestic terrorist organization and said with scant evidence that they have been responsible for the violence that erupted in some of the coast-to-coast protests after Floyd’s death.

In recent days, the protests have been largely peaceful with few arrests.