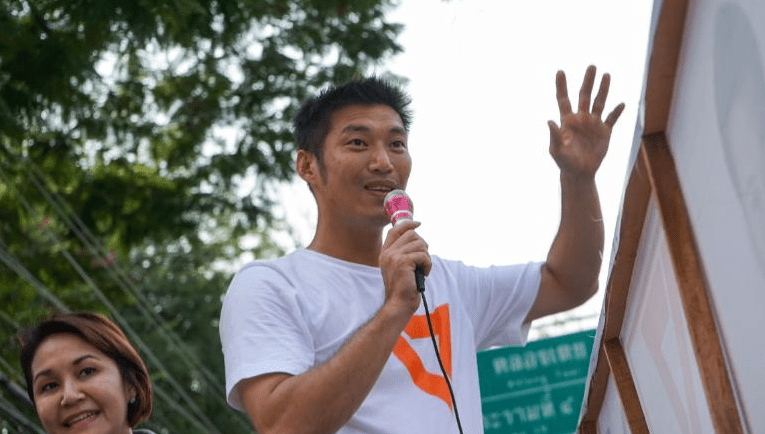 Choltanutkun Tun-Atiruj wasn’t old enough to vote in the last official elections held in Thailand in 2011.

Like many of the 7 million other first time voters, she came of age during half a decade of military rule that has governed the country since former general turned Prime Minister Prayut-chan-o-cha seized power in a 2014 coup.

“We have had our voice taken away for over five years,” she says.

On Sunday, Thais will finally be able to make their voice heard as they go to the polls for the first time in eight years, in what is widely considered to be a contest between parties aligned with the military, and the pro-democracy camp, many of which are loyal to exiled former prime minister Thaksin Shinawatra and his political dynasty that has dominated domestic politics since 2001.

With 18- to 25-year-olds making up about 15% of the nearly 52 million Thais eligible to vote, the youth ballot could prove decisive. Parties will be vying to win a majority in the 500-seat lower house of parliament on Sunday.

“I think a lot of people are quite tired of how country has been run over five years, and we just want to come out and make a small move to show we are not happy about,” said 26-year-old Choltanutkun, a writer for an event listings magazine in the capital Bangkok.

Prayut’s 2014 coup ended months of violent street protests that led to the ouster of former prime minister Yingluck Shinawatra — Thaksin’s sister. And many Thais have become increasingly frustrated with Prayut’s failed promises to restore the nation to civilian democratic rule.

Activists say Prayut’s time in power has been marked with increased repression. Hundreds of activists have been charged under draconian laws such as sedition or lese majeste — which prohibits criticism of the royal family — and the sphere for robust public discourse has all but disappeared thanks to a Computer Crimes Act that restricts online expression and increases surveillance and censorship.

At the forefront of many young Thais’ reasons for voting are to restore those democratic freedoms many see as being eroded under junta rule.

“Freedom of expression is one of the issues that I care about the most,” Choltanutkun said, from her home in Bangkok.

“It’s OK to have differing opinions, but right now Thailand has no ability to be able to debate without attacking one another. You need to be able to talk about things and find a better solution for everyone.”

Vocal, young politicians are hearing that message from the young generation and are promising a fresh, new kind of politics.

A rising star of the Democrat Party is Oxford educated Parit Wacharasindhu, 26, who co-founded the “New Dem” group to encourage a younger generation of politicians and voters to participate in the election.

“Whether it’s bringing in more technology to improve our education system, whether it’s a better kind of data collection across the health care system. Whether it’s kind of liberal progressive issues like the environment or LGBT movement. These are issues that the country as a whole expects the younger generations to take a leading role,” Parit told CNN.

Parit, who is the nephew of Democrat leader and former prime minister Abhisit Vejjajiva, said the test would be to capitalize on the engagement from young people.

“I think what we can do is to try to get young generations to go out and vote and make sure that this vibrant scene, this excitement the new generations are having at the moment, does not go to waste,” he said.

The biggest priorities, Parit said, are solving the country’s economic issues, restoring civil liberties, and tackling corruption — issues that he sees are the biggest failings of the military government.

Presenting itself as one of the anti-junta parties, FFP’s policies include changing the military-drafted constitution, cutting the defense budget, increasing government transparency, and strengthening democratic institutions.

“This is a kind of party Thai politics has not seen before in the past. It’s radical, welfare-minded and pro-business,” said Thitinan Pongsudhirak, director of the Institute of Security and International Studies at Chulalongkorn University.

“It’s a turning point and overdue because Thai politics has for more than the past three decades been dominated by the same old faces of politicians.”

It also seeks to bridge the divide in Thailand’s heavily polarized political landscape, which has historically pitted the royalist, pro-establishment Democrats against those loyal to exiled former prime minister Thaksin — often culminating in deadly street protests.

“It’s the most progressive party that we’ve had in like forever,” said first time voter Choltanutkun.

And FFP’s popularity could be translated into real political clout, according to analysts.

“2019 is the first time in Thai history that young people have organized a political party (Future Forward) with a chance of really capturing a number of seats in parliament,” said Paul Chambers, a lecturer at the College of ASEAN Community Studies at Thailand’s Naresuan University.

‘By hook or by crook’

Through the pro-military Palang Pracharat Party, the junta is campaigning to stay in power and appears to see the outspoken, popular new party as a threat.

Thanathorn and two other party members face criminal charges for criticizing the military regime online. He denies the charges.

Thanathorn was also accused of falsifying information in his online biography that allegedly misled voters, but the election commission dismissed the case after he said it was merely an editing error, according the Bangkok Post.

The party’s deputy leader was also charged with sharing a likely false story about a top military official spending 12,000 baht (US$378) for a cup of coffee.

The anti-junta camp also suffered a huge blow earlier this month when Thailand’s Constitutional Court dissolved the Thai Raksa Chart Party (TSN) after it nominated the King’s sister, Princess Ubolratana Rajakanya, to be its candidate in the elections. Pheu Thai was relying on TSN seats to bolster support in the lower house.

Junta leader Prayut — who is contesting in the elections with Palang Pracharat — has softened his image in recent weeks in a bid to appeal to voters.

The party’s main voter base is the royalist Bangkok elite as well as supporters of former lawmakers who swapped parties to join with Parang Pracharat.

To garner more support, the party has also touted populist policies such as expanding welfare programs, cutting the personal tax rate and raising the daily national minimum wage to 400-450 baht ($12-$14).

Speaking at his first and final campaign event in Bangkok on Friday, Prayut said he would “make our country peaceful and safe” and protect the monarchy institution — King Maha Vajiralongkorn’s coronation ceremony takes place in May.

“This land is holy, no one shall dare to betray. We will fight to preserve the nation, religion and the King,” he said.

It appears his insurance policy, however, is a military-drafted 2017 constitution — the country’s 20th since absolute monarchy ended in 1932 — that consolidates the military’s role in politics for years to come. It allows for an unelected prime minister and a third of the legislature to be appointed by the military brass.

Prayut also changed electoral rules so it’s more difficult for big parties like Thaksin’s main opposition Pheu Thai to return to power through redrawing constituency boundaries to its advantage and introducing a new voting system that caps the number of party list lawmakers. The government has denied accusations that it’s trying to hold onto power.

And his legally binding 20-year national plan — designed as a blueprint for the country’s development after years of political crisis — could hobble future governments’ ability to enact policy, critics say.

The Election Commission has until May 9 to announce the official results.

“It is likely that in the aftermath of next week’s election, Thailand’s military establishment will, by hook or by crook, win a coalition majority, but only with the help of junta-appointed senators,” said Chambers. “The use of crony senators to win would also make Prayut’s electoral victory illegitimate in the eyes of most Thai people.”

The Election Commission has until May 9 to announce the official results. The party that could be in a position to decide this race is the Democrat party — the oldest political party in Thailand and Pheu Thai’s historic rival.

Analysts say the Democrats could be the second largest winning party on Sunday, and if that’s the case, party leader and former prime minister Abhisit Vejjajiva, could play kingmaker, but he has ruled out forming a coalition with Thaksin’s Pheu Thai. He also does not want Prayut to return to power.

“Aside from poor performance in his handling of the economy and failure to deliver promised reforms, Gen. Prayut’s attempt to hang on will likely create new conflicts and tension in contrast to the apparent stability that he has presided over in the last five years,” he told CNN on Thursday.

Still, Abhisit sees the Democrats at the center of any new government and is after the top job.

“We aim to be the core of the next government,” he said.

Though invigorated by a fresh brand of politics on offer, young Thais are wary that the election won’t change decades of conflict and polarization and overcome a powerful military set on retaining power.

“Honestly, this is not the answer to Thailand’s democracy,” Choltanutkun said.