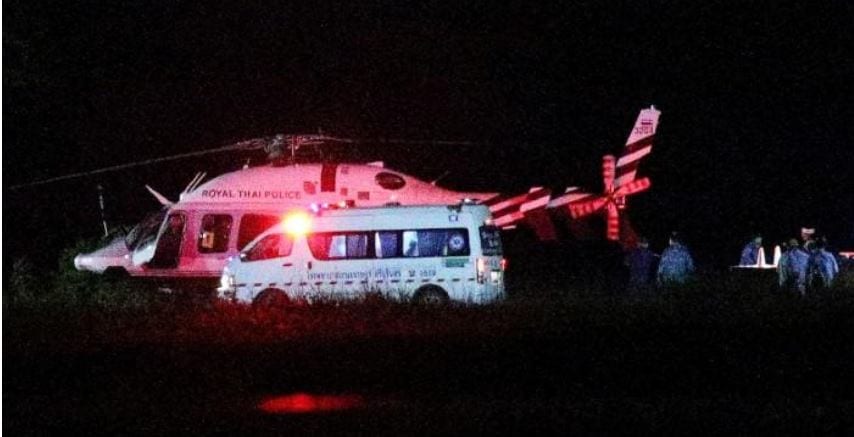 Eight boys and their soccer coach who remain trapped in a flooded cave in northern Thailand waited for a rescue operation to resume on Monday, a day after the first four were brought out safely and whisked away to hospital.

The daring and dangerous bid to rescue the boys – aged between 11 and 16 – was suspended by the mission chief late on Sunday to replenish oxygen supplies and make new preparations, which he said would take at least 10 hours.

Divers had to hold the boys close to their bodies to bring them out and each had to wear an oxygen mask to enable normal breathing, authorities said.

Bursts of heavy rain soaked the Tham Luang Cave area in Thailand’s northern Chiang Rai province overnight, increasing the risks in what has been called a “war with water and time” to save the boys.

The story of the “Wild Boars” soccer team, who first ventured into the caves more than two weeks ago before flood waters trapped them inside, has gripped Thai and international media.

“Football’s Coming Home. First Wild Boars Out,” a headline on one online Thai paper said on Monday, referring to a song chanted by English soccer fans at the World Cup currently underway in Russia.

The boys were discovered huddled on a muddy bank by British divers a week ago. A video showed one of them was wearing an England soccer shirt.

Prime Minister Prayuth Chan-ocha, leader of the Thai military junta that seized power in 2014, planned to visit the cave site on Monday.

Thirteen foreign divers and five members of Thailand’s elite navy SEAL unit are the main team guiding the boys to safety through narrow, submerged passageways that claimed the life of a former Thai navy diver on Friday.

Some of the boys are not strong swimmers and none has diving experience.

The head of the rescue mission, Narongsak Osottanakorn, announced late on Sunday the first four children were brought out safely. There were no further official details on the boys’ identity or their medical condition on Monday.

Narongsak said earlier on Sunday the mission may take three or four days to complete.

Thai media identified the first boy to come out as Mongkol Boonpiem, 13.

A source inside the Chiang Rai Prachanukroh hospital where the boys are being kept said their condition was “not bad” but said doctors were watching for signs of emerging conditions such as hypothermia.

A short official video released by the rescue operation late on Sunday showed four ambulances with their lights flashing driving up the muddy dirt track that leads to the cave complex.

It also showed about six soldiers carrying a stretcher towards a waiting ambulance. The stretcher was loaded into the back of the ambulance as medics rushed in the side door.

Narongsak was then seen shaking hands with a senior army figure and watching intently at the entrance of a long green medical field tent beside around 15 soldiers.

The video also showed a Caucasian diver walking heavily up a muddy slope carrying a face mask and a small oxygen tank, wearing a backpack with his flippers dangling behind his legs.

The diver was being applauded by a group of onlookers.