By Tonny Ndungu For Citizen Digital 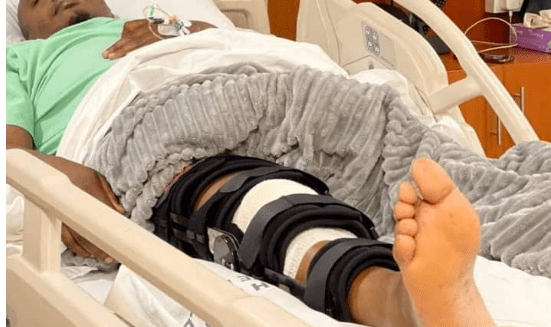 A video that made rounds online on Monday showed the legislator being wheeled into a ward, his right foot clad in a brace.

According to gospel musician DK Kwenye Beat who is apprised of the matter, the MP has been experiencing pains on his left foot from a 2019 incident.

“He underwent surgery today, Monday at around 5a.m at the MP Shah Hospital, his right knee was operated on” DK told Citizen Digital on Monday “He has been experiencing pains on the foot for while now”

The pains reportedly got worse a fortnight ago after he returned to Kenya from India, and he was then advised to go under the knife.

The legislator sprained his right foot during the fracas between city council askaris and traders of Muthurwa, Marikiti and Wakulima markets in 2019.

Drama started when the askaris conducted an operation to remove traders who have encroached on the road. In the process, several of the traders’ leaders were arrested sparking chaos.

“As I was addressing the traders, the police threw teargas at us and that’s when I got injured as I was trying to run away from the tear gas.

“I did not even realize that I had broken my leg at the moment, I later noticed that my leg had swollen,” he continued

He was rushed to the Karen Hospital where he was treated and discharged.