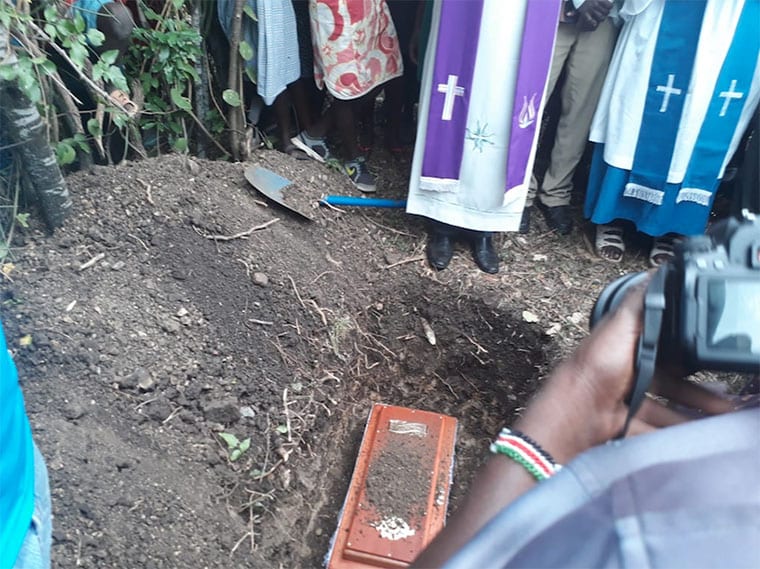 The seven-month-old foetus of the slain Rongo University student Sharon Otieno was finally buried in Magare Village, Homa Bay after a six-hour delay.

Also Read: ‘I have nothing to do with Sharon’s death,’ Obado says

The ceremony was delayed after the family failed to secure a burial permit in time which was required before collecting the body from the morgue.

According to Luo tradition, children are supposed to be buried before noon and the family had planned to conduct the ceremony at that time.

Melida Auma, the late Sharon’s mother said the permit was to be processed at Rachuonyo District Hospital mortuary where postmortem was conducted.

However, it was only at 4pm that doctors from Rachuonyo District mortuary sent the permit to morgue operators via WhatsApp and the baby’s body released to the family.

Emotions ran high during the burial ceremony which was led by Anglican Church of Kenya (ACK) Reverend Samuel Allan.

He urged members of the public to avoid making insensitive statements over the death of Sharon Otieno.

Migori Governor Okoth Obado has since confirmed that he had a romantic relationship with the deceased and that the baby she was carrying at the time of her death was his.

The Governor however maintains that he had nothing to do with her murder.

Sharon’s family say they will not bury their daughter until her killers are arrested and prosecuted.

She went missing on September 3 after a meeting with Nation journalist Barack Oduor at a Migori hotel.

Oduor claims they were abducted from the hotel but he managed to escape by jumping out of the vehicle they had been bundled into.

Sharon’s lifeless body was found near Kodera Forest in Homa Bay two days later and an autopsy report revealed that she had been stabbed eight times.

Used condoms found at the murder scene allude to rape before the murder and the Government Pathologist also reported that the seven-month-old foetus had stab wounds inflicted during the attack on Sharon.