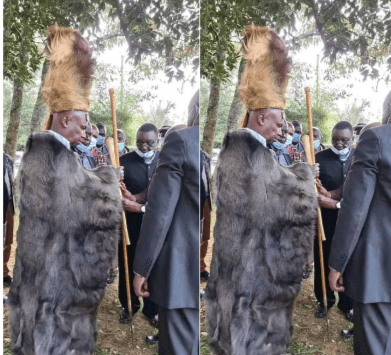 The crack-of-dawn ceremony which took around three hours at Moi’s Kabarak home saw the senator receive the communities’ instruments of power and the mandate to seek the country’s top job.

A similar ceremony had been halted on Saturday, January 2 after youths blocked Senator Moi from meeting with the Talai elders.

They barricaded the entry to the residence of Councilor Christopher Arap Koyoki.

Reports indicate that the councilor was to install Senator Moi as the official Kalenjin leader, a position said to be occupied by Dr. Ruto.

The Senator was forced to turn back after irate youths blocked his convoy.

He later proceeded to Kabiyet Trading Centre to interact with other youth before he left the area.

Rev. Baasi said the DP had been installed as the community kingpin following the death of former President Daniel Arap Moi.

However, a week later, a section of the Talai elders scoffed at the coronation claiming that the traditional ceremony was illegal.

Led by Stephen Sugut, the elders said the ceremony was carried out by young men contrary to the traditions.

The elders also noted that the young men who conducted the ceremony did not consult the Kalenjin elders.

“We are not against the coronation that was done at Kapsisiywa, but we are against the way in which it was executed for instance, there is not use of honey when the leader is dressed with the Sambut,” Sugut told Citizen TV.