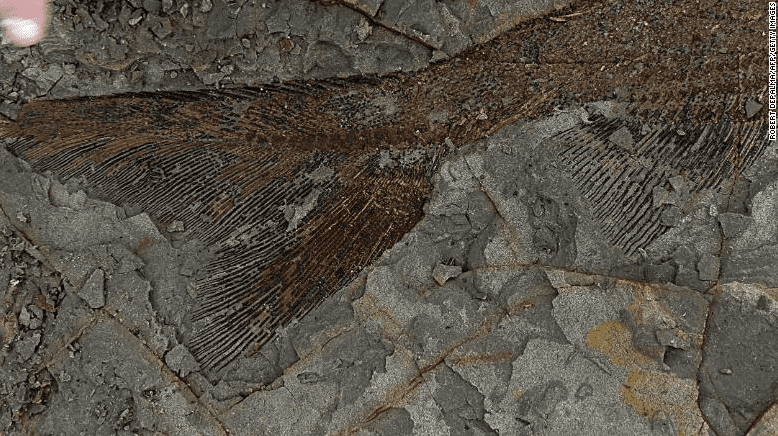 An international team of scientists has discovered a fossil graveyard containing what it describes as “extraordinary evidence” that an asteroid that hit the Earth 65 million years ago was responsible for the extinction of the dinosaurs.

The team of paleontologists from the University of Kansas and the University of Manchester found the “motherlode of exquisitely preserved animal and fish fossils” in North Dakota, according to a study published Monday.

The impact of the asteroid, which created the Chicxulub crater beneath Mexico’s Yucatan Peninsula, was one of the most destructive events in Earth’s history, extinguishing 75% of the planet’s animal and plant species.

The devastation caused by the impact included massive tsunami-like surges and “ejecta” — torrents of rocks, like fine sand and small glass beads — the report said.
“A tsunami would have taken at least 17 or more hours to reach the site from the crater, but seismic waves — and a subsequent surge — would have reached it in tens of minutes,” said Robert DePalma, the report’s lead author.
At the fossil site — Tanis in North Dakota’s Hell Creek Formation — the surge left “a tangled mass of freshwater fish, terrestrial vertebrates, trees, branches, logs, marine ammonites and other marine creatures,” DePalma, a doctoral student from the University of Kansas, said.
“No other site has a record quite like that,” said DePalma. “And this particular event is tied directly to all of us — to every mammal on Earth, in fact.

Because this is essentially where we inherited the planet. Nothing was the same after that impact. It became a planet of mammals rather than a planet of dinosaurs.”

Phil Manning, a paleontologist from the University of Manchester and co-author of the study, called the find a “unique geological and paleontological treasure trove” that contains the first direct evidence of larger organisms killed by the Chicxulub impact.
“The sediments, fossils and associated impact debris make this an important site for those who study the extinction event that helped wipe out the dinosaurs,” he said.
However, prominent paleontologists not involved in the study sounded a note of caution.
“The geological interpretation seems very credible to me, and the fish fossils do seem to record a catastrophic event at or near the asteroid impact.
But the dinosaur aspect of the story isn’t so clear to me,” Stephen Brusatte, a lecturer and researcher in paleontology at the University of Edinburgh, told CNN.
“The only dinosaur fossil mentioned in the paper is a single partial hip bone,” he added. “I hope there are other dinosaur fossils at the site, and I look forward to hearing more about them.

I just hope this hasn’t been over-sensationalized. It would be awesome if it’s all true.”

Paul Upchurch, professor of paleontology at University College London, also had some reservations about the study’s findings.
“It’s a cool find and very satisfying to get a snapshot of what happened in one particular part of the world — it certainly adds to the evidence of how devastating the impact was, even hundreds or thousands of miles away,” he told CNN.
However, he added that if the ejecta came from a different, or perhaps much smaller, impact at a different time and place, or the ejecta did come from Chicxulub but stayed in the water system for a long time afterward, “then it is possible that the fish etc died for some other reason — something less spectacular and more local — and had little to do with the Chicxulub impact.”