Scary hours as woman is locked inside a Nairobi pizza joint 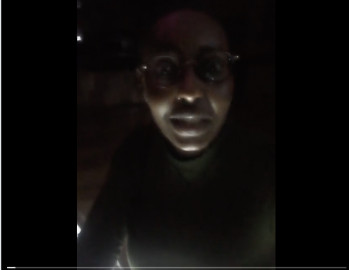 If you thought you were having a bad day, think of Sandra Wahiga, a Kenyan woman who spent a generous part of her Thursday evening locked up inside a Pizza joint smack in the heart of Nairobi’s Central Business District.

In an appeal for help that she put out on Twitter, Wahiga said she went to the ladies room after catching dinner with a friend at the Pepinos Pizza along Kimathi street.

However, on emerging from the ladies, she realised that the joint was deserted and locked, and there was no one in sight.

“Anyone who follows me, I need your help. I am locked in at an eatery along Moi Avenue, @Pepinos pizza, @Chicken Hse, @Blueberry along Kimathi street CBD. I was in the ladies when they locked up. Which was an hour ago. Please retweet to help me get to the manager or owners,” she Tweeted a video of herself inside the locked pizza joint.

It is not clear how long she had been in the ladies room,  but she did confirm that the establishment told her on phone that the two people charged with locking up the restaurant had long left.

“I’m just here, from talking to them, the tell me that the place has two people who lock it na mmoja ameenda.. I cannot sleep here,” she lamented.

Ms Wahiga said she was mostly worried about having to sleep inside the establishment and missing work the following day.

“I have to go to work tommorow… anyone who knows anyone who could help in this situation, please help…. yeah…. eeerrm, I’m stuck,” she added.

There was a light moment to her Tweet, with Kenyans on Twitter wondering why, surrounded by Pizza and toppings, all alone, she was not stuffing herself silly.

While @Brayo_ryan Tweeted: I” don't know what seams funny but trully how will you explain to your boss that the reason you are late for work is because you were locked somewhere in the ladies at an eatery in  the CBD”

Others wondered how she got locked up yet she was with company at the establishment.

“How your friends were comfortable leaving and waiting for you outside as they locked you in is what puzzles me,” the @firstwhitewalker tweeted.

The story has a happy ending though, Ms Wahiga was rescued some few hours later.  Police officers responded to her call for help and even dropped her home after the ordeal.

“Help came through. I was rescued. Thank you to each of you who took the time to retweet or reply to me. It meant so muchSpecial mention goes to  @NPSOfficial_KE who came to my rescue,” Ms Wahiga Tweeted after the ordeal.

“Special mention to Inspector Oyoo, he specifically ensured that I was dropped home,”

She also thanked Kenyans on Twitter who ensured that she got help.