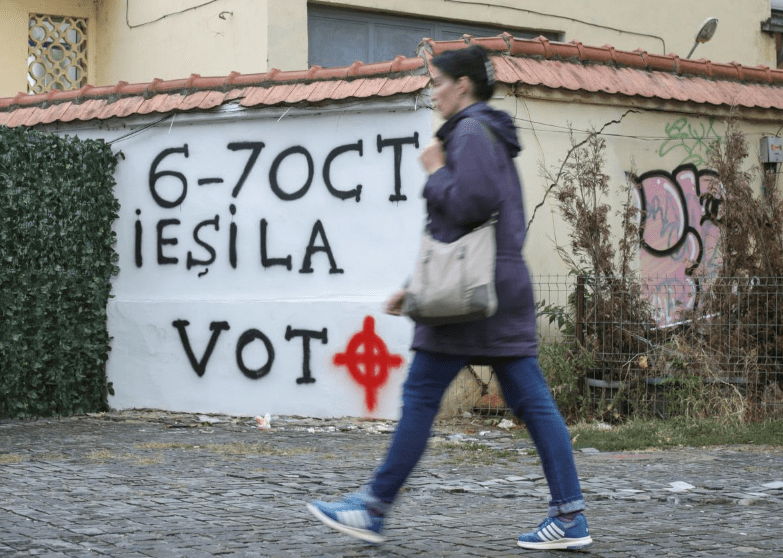 Romanians began voting on Saturday on whether to change the constitution to comprehensively ban same sex marriage in a two-day referendum that rights activists say has stirred hate speech against LGBT people.

The conservative state is already one of the only EU members to bar marriage or civil partnerships for same sex couples.

But supporters of the proposal, including the Orthodox Church and all but one parliamentary party, say they want to go further and change the constitutional definition of marriage from a union of “spouses”, to one exclusively of a man and a woman to stop gay couples winning the right to marry in the future.

Dozens of human rights groups, which are encouraging people to boycott the ballot, have warned that approval would embolden further attempts to chip away at the rights of minority groups and push Romania onto a populist, authoritarian track.

A poll released on Friday by CURS estimated a turnout of 34 percent – above the needed 30 percent threshold – with 90 percent in favor of the change.

A group called the Coalition for the Family collected 3 million signatures to enable the change. The lower house of parliament voted in favor last year and the senate followed in September, making the referendum the last needed stage.

Some Coalition campaign posters urged people to vote “Yes” to defend family values or run the risk of gay couples stealing or adopting their children. A separate advert said a “No” vote would enable a man to marry a tree.

“Many fear that what has happened in other countries, such as legalizing marriage between a man and an animal, could happen here,” the leader of the ruling Social Democrat Party (PSD), Liviu Dragnea, told television station Romania TV.

Days before the vote, the government relaxed anti-fraud monitoring and limited options for challenging the result, while the country’s broadcasting regulator eliminated a cut-off date for campaigning.

“There are … no efficient, applicable mechanisms to verify fraud for this referendum,” independent think tank Expert Forum (EFOR) said, adding the conditions have created “a climate of distrust in the fairness of the process”.

Some opposition politicians and activists have accused the PSD of using the vote as a smokescreen to divert attention from its leader’s legal problems, and its clashes with the European Commission over the rule of law.

Dragnea’s appeal against a conviction in an abuse of office case begins on Oct. 8, one day after the vote.

“The plan is clear: creating an anti-European sentiment in Romania that Liviu Dragnea can use when European officials ask him not to destroy the judicial system, rule of law and anti-corruption fight,” former Prime Minister Dacian Ciolos said.

The government has dismissed the accusations and the Orthodox Church has said a “Yes” vote would be Christian, democratic and patriotic.

Romania decriminalized homosexuality in 2001, decades after neighboring countries and LGBT discrimination is widespread.