Revival of 4K club to rely on volunteer students 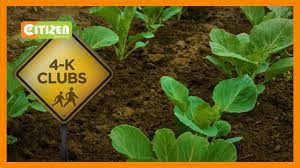 The Ministry of Agriculture has put in place an implementation framework that will guide operations of the newly rebranded 4-K Clubs in the country.

Agriculture Chief Administrative Secretary Anne Nyaga says they will focus more on volunteerism to encourage pupils to join and ensure all schools embrace the concept albeit in a phased approach.

On Friday last week, President Uhuru Kenyatta presided over the relaunch of the country’s oldest agricultural platform which existed in the public schools.

Days after the launch, the ministry of agriculture has hit the ground running in ensuring the once popular club, becomes a permanent feature in learning institutions.

“4k club website that we have populated with all materials, we have developed 4k club guide manual and also developed regalia system as well as coordination structur with 6 ministers at ministerial level; ministry of treasury, environment , water, education and the project steering committee,” Anne Nyaga, CAS Agriculature said on Wednesday.

With an implementation framework already in place, the ministry is developing structures at county level to reach out to as am many schools as possible.

“At the very onset we want to build capacity of teachers…6000 teachers…then once we set up credible models form these clubs, then it is expected that they will support five other schools from their locality,” Ms Nyaga added.

4-K clubs were popular in the eighties and early nineties. Primary school going children learnt skills such as growing of crops and rearing of livestock like rabbits. The concept however died in mid nineties.

“It was partly used as a punishment tool where when you did something wrong you were sent to school plot , so you are told, go weed, uproot plants, water them no one wanted to partake 4k club activities voluntarily,” she added.

The government has expanded the scope of the new 4K club to cover climate change, novel diseases, environmental conservation, healthy living as well as civic engagement.

“Actually our target is to have all 4K clubs in all schools in the country, but we are doing it in a phased approach….so we target to reach 20% of schools in about three years, we are emphasising more on volunteerism, once a school has been capacity build we want to ensure, 1 school, 1 club mentors five other clubs,” she said.

Kenya has an estimated thirty one thousand primary schools.