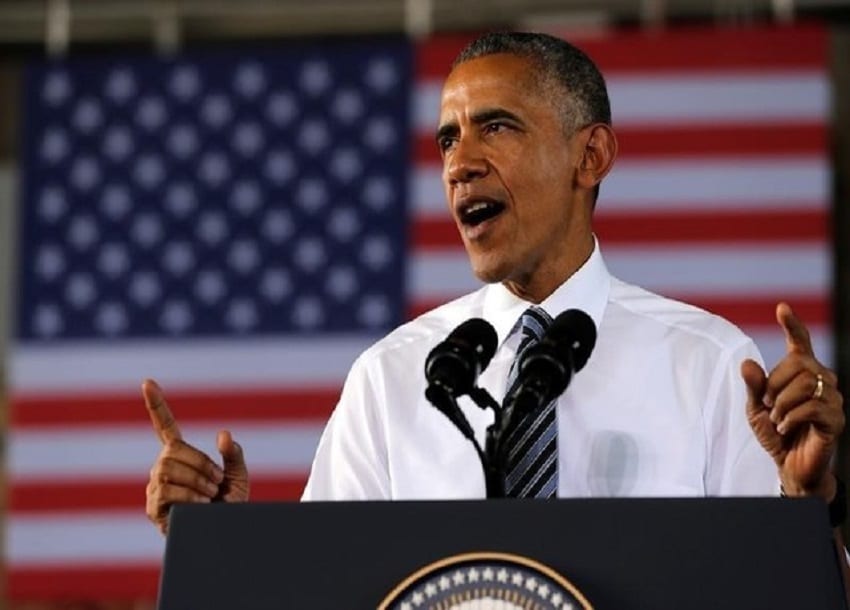 Joice Heffron, a Republican delegate from Minnesota and mother of a police officer, wants to know why President Barack Obama won’t turn the White House “blue.”

Heffron – like many Republican delegates – thinks Obama has inflamed tensions by expressing sympathy for the Black Lives Matter movement, the protest movement sparked by a series of police shootings of black men that were caught on video.

“With these police shootings, they asked that the White House be turned blue” by bathing the presidential residence with colored floodlights,” Heffron said. “They’ve done it for the rainbow people, for lesbian and gay marriage. They’ve done it for breast cancer. Why wouldn’t he do it in honor of the police officers?”

While Obama has not ordered the White House to be lit up in blue— the color of many police uniforms— he has spoken at length against the police shootings, including during a personal appearance at funeral services for five officers gunned down in Dallas. But some officers and their supporters say that by also voicing sympathy for the families of young black men who have been killed or otherwise mistreated by police, he has encouraged anti-police sentiment.

Presumptive Republican nominee Donald Trump, for his part, has come down unequivocally on the side of the police, promising that if elected he will be “the law and order president.” That theme dominated the remarks of convention speakers Monday as they reiterated the need to prevent future attacks on police.

“Many Americans feel an increasing unease about their ability to be safe,” said Office David A. Clarke, Milwaukee County Sheriff, in a convention speech Monday. “What we witnessed in Ferguson and Dallas and Baton Rouge was a collapse of the social order.”

In a previous tweet, Clarke linked the Black Lives Matter movement to Islamic State, the self-described “caliphate” based in Syria and Iraq. Clarke said the protest movement, spawned in reaction to the videos of black men being killed in confrontations with police, would create anarchy but that Donald Trump had an understanding of the social code that would help make the country safe.

Unlike urban neighborhoods in cities like Cleveland, where the message of African American protesters often resonates, little sympathy for Black Lives Matter can be found on the floor of the Republican convention. Many delegates wore blue ribbons tied to their convention credentials in memory of the slain police officers, saying they hoped a Trump presidency would ease the anxiety created by the shootings.

Joe Sacco, a Pennsylvania delegate who supports Trump, served as a police officer in Baltimore for 14 years. He said the shootings of officers in Dallas and Baton Rouge reminded him of civil unrest that rocked the nation in the 1970s.

“The backlash came against us for trying to protect decent families that don’t commit crimes, having police officers gunned down and ambushed. It’s like what we went through in the ’70s with the Black Panthers,” said Sacco, who warned the Black Lives Matter protesters “would do the same thing.”

Sacco thinks the police shootings now are much more troubling because “we didn’t have a president [then] that called for gun control and all the time reprimanded police officers for the treatment of the black population for the past years.”

In public remarks following the attacks on police officers, Obama has in fact expressed sympathy for both police officers and young black men who have died at the hands of one another, arguing that mutual respect and understanding is needed to end the violence.

“We as a nation have to be loud and clear that nothing justifies violence against law enforcement. Attacks on police are an attack on all of us and the rule of law that makes society possible,” he said Sunday after the latest police slayings in Baton Rouge.

Brian McAuliffe, a delegate from the state of Texas, said in Cleveland Monday that all the delegates understand the importance of this election.

“That’s why I’m here because we can’t allow Hillary to become president because she’ll continue the same disastrous policies that Obama has put in place,” he said. “Our country, our republic can’t withstand that. I think we won’t be a free society.”

But McAuliffe differed from many other delegates on Ohio’s controversial open carry law, which allows weapons to be carried in plain sight anywhere outside a security ring surrounding the convention hall. In the wake of the police shootings and with the threat of intense protests, many are questioning the wisdom of that policy.

“In a crowd it would be really easy for a bad person to use a gun against you,” he said.

The delegates responded strongly to former New York City Mayor Rudolph Guiliani’s call during his convention speech, asking, “What would happen if there was no white America, no black America – just America?”

“Would you want to be a police officer right now?” asked Ginger Bigelow, a Maryland alternate delegate who has a brother and a husband in law enforcement.

Bigelow charged that a lack of leadership from Obama had opened the door for “all these little factions,” damaging police morale. “I think this administration has led us down this road – the whole race baiting thing has been overblown,” she said.

“We all know Mr. Trump is a serious supporter of law enforcement and what we need is a serious leader,” she said.