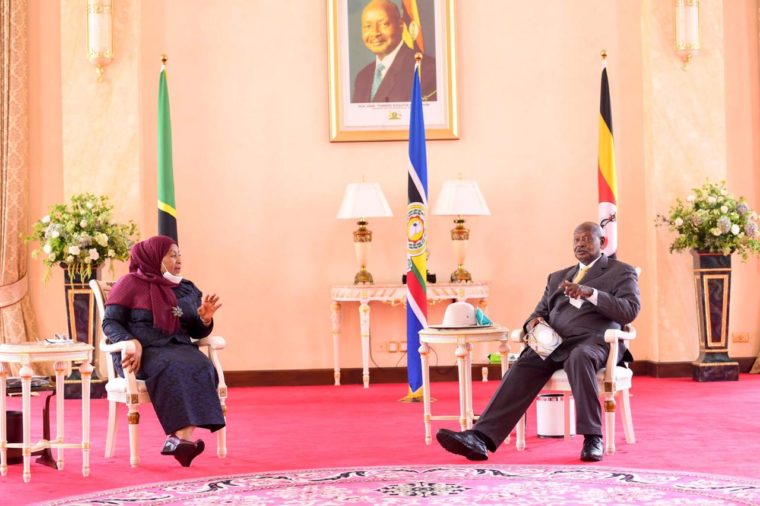 Tanzanian President Samia Suluhu has made her first trip as President to Uganda, where she is spending the day, and appears to have broken tradition by wearing a face mask.

Ugandan President Yoweri Museveni tweeted photos of the Tanzanian Head of State’s arrival with the caption:

“The arrival of H.E Samia Suluhu Hassan, President of the Republic of Tanzania at State House Entebbe,”

President Museveni stated on his social media platforms that the aim of his Tanzanian counterpart’s visit was to strengthen bilateral ties and finalize the East African Crude Oil Pipeline (EACOP) Tripartite project agreement.

Interestingly, President Suluhu and her delegation wore masks throughout the visit and subsequent meeting, only taking them off briefly during the bilateral talks.

The latest comes days after the newly-sworn in Tanzanian Head of State appeared to draw a line under her predecessor’s controversial stances on COVID-19 and the media, indicating an apparent change in course for the nation after the death of John Magufuli last month.

“We cannot segregate ourselves like an island, but also we cannot blindly accept what is being brought forward to us (on COVID-19) without carrying out our own investigations and inputs,” she told officials at State House in the commercial capital Dar es Salaam. “Let us have a stance.”

She also announced the establishment of a committee to investigate whether Tanzania should take the same approach to the pandemic as the rest of the world.

Though she did not announce any other changes related to COVID-19 policies, the remarks stood in firm contrast to the position of Magufuli, who was Africa’s most prominent COVID-19 sceptic.

President Suluhu also announced that media that had been banned by Magufuli’s government should be allowed to operate. “We should not ban the media by force. Reopen them, and we should ensure they follow the rules. We should not give them room to say we are shrinking press freedom.”