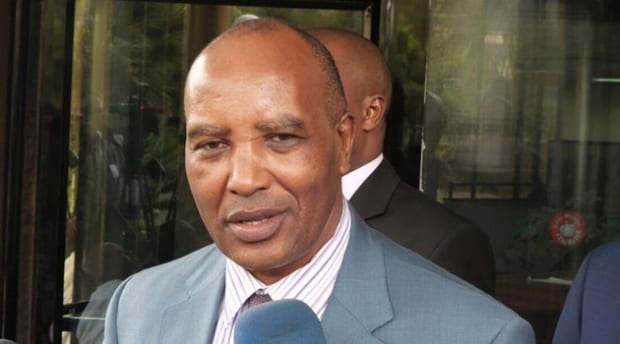 Former secretary to the cabinet Francis Kimemia, who has declared intent to vie for Nyandarua County governorship, has warned the incumbent governor Daniel Waithaka Mwangi to prepare for a jail sentence after expiry of his term.
Speaking after meeting members of his campaign team at Kagunda village in Tumaini Division, Kimemia accused Governor Mwangi of selfishness and putting up with rampant corruption in the county.
The career civil servant claimed that massive impropriety of public resources has impeded development agenda in the county.
Kimemia dispelled rumours that he is eyeing for a Party of National Unity (PNU) ticket to run for the seat insisting that he is in contention for a Jubilee Party ticket.
The once powerful civil servant during the retired President Mwai Kibaki’s regime and also during the early days of Jubilee administration gave up his job as the chairman of Industrial and Commercial Development Corporation (ICDC) to join politics.
Kimemia, who has been meeting opinion shapers in the county, has premised his campaigns on an all-inclusive leadership.