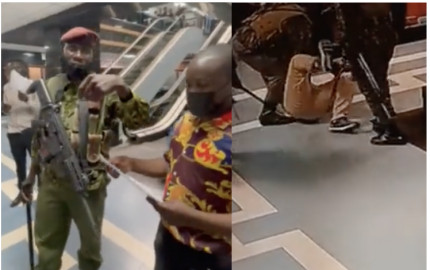 The National Police Service now says that activist Boniface Mwangi attempted to block police officers on official duty from arresting several defaulters at the Pension Towers on Friday, during which, an altercation which was filmed ensued.

The National Police Service (NPS) said in a statement to the press on Saturday that the police officers in the video were performing their lawful assigned duties of assisting KRA officers to enforce Nairobi County Government/Nairobi Metropolitan Services revenue collection obligations as part of their lawful mandate as per the contract between the two statute bodies both with revenue collection mandates.

“Notwithstanding that the exercise was conducted in broad daylight and in the open and with some defaulters already having been arrested by the enforcement team,” the NPS said on Saturday.

According to the statement, the service is also investigating whether the activist defied the law and obstruction of law enforcement agents for the purposes of either facilitating the escape of arrested defaulters or intimidating the officers from carrying out their lawful duties.

At the same time, the NPS denied claims that GSU officers assaulted the activist, who claimed to have sustained bruises and a broken phone as a result of the altercation.

“Towards the end of the scene of altercation, the subject activist can clearly be seen running away, falling on the floor all by himself, and kicking his legs in the air. He is surrounded by the officers who are trying to restrain or contain him,”  the statement from the NPS adds

“The subject activist was not assaulted but instead caused an unnecessary drama by running away and felling himself on the floor only to cause a commotion that was meant to aid the escape of the arrested defaulters.,”

In a video that has since gone viral, Mwangi claimed that several young men who were accompanied by GSU officers walked into his barbershop on Friday and arrested the receptionist.

“Because l recorded them, the GSU officers wanted to take my phone, I refused and in my attempt to ran away, I fell. They caught up with me, and beat me up. Even after the beating l didn’t hand over my phone.,”

Mwangi said he has since reported the matter to the Central Police Station and the IPOA.

Meanwhile, the Kenya Revenue Authority (KRA) responded to the matter on social media, maintaining that all KRA staffers on duty must always provide identification before entering any business premises.

“Our attention has been drawn to the tweet below. Kindly note that all KRA staff on duty must always provide identification before entering your premises. Additionally, we urge the public to utilise the #Thibitisha KRA staff using our imposter detection system,” the Authority tweeted.