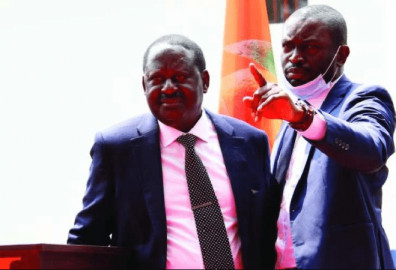 The Orange Democratic Movement (ODM) party has rubbished reports of having an already formed line up of preferred candidates for elective positions in Siaya County ahead of the 2022 General Elections.

This comes following mixed reports emerging from the county about the gubernatorial race, even prompting statements from Siaya Senator James Orengo and Ugunja MP Opiyo Wandayi.

ODM, in a statement released by party Secretary General Edwin Sifuna on Tuesday, said it has not settled on any candidate for any elective position anywhere.

“The ODM party leadership has read with interest reports appearing in a section of the media to the effect that there is a line-up sanctioned by the party for various elective positions in Siaya County,” said Sifuna.

“The ODM National Elections Board is the only organ mandated to deal with all matters pertaining to party elections and nomination of candidates for various positions. No other organ or individual can purport to do the same.”

He further added: “We acknowledge that consensus is one of the four methods our Party Elections and Nomination Rules provide for but this can only be initiated by the NEB, which has yet to roll out 2022 Party primaries’ programme.”

Siaya Senator James Orengo had earlier come out to dismiss reports that he is among candidates preferred by ODM for various elective positions in the county come the 2022 General Elections.

Senator Orengo, in a public statement released on Tuesday, termed the alleged list as published by a local daily as false and malicious.

According to the Senate Minority Leader, the ODM party is yet to conduct nominations for any positions in Siaya County or anywhere else, for that matter.

Ugunja MP Opiyo Wandayi, on his part, last week said that he shall not be seeking the Siaya governor’s seat in 2022.

Wandayi, who is also the National Assembly’s Public Accounts Committee (PAC) Chair, said he arrived at the decision following consultation with the ODM leadership.

“Following extensive consultations with the 0DM leadership and the rank and file of the party and, having listened keenly to the voices of my Ugunja constituents, I wish to make it known that I shall not be a candidate for the position of Governor of Siaya County in 2022,” said Wandayi.

“As a disciplined and loyal member of the progressive movement, I will lend my full support to the candidates that 0DM shall have duly nominated for the position of Governor and other positions in that election.”