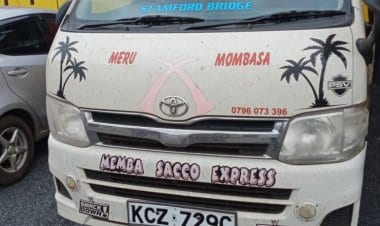 The National Transport and Safety Authority (NTSA) has suspended the operating license of Memba Travellers sacco after one of its vehicles was involved in the death of a female passenger in Juja.

In a notice on Tuesday, the Director General said the sacco officials were summoned and appeared before the Authority.

Following the meeting, the NTSA directed that all vehicles operated by the sacco cease operating immediately.

All the vehicles operated by the sacco will also be required to undergo a mandatory inspection at the Authority’s Likoni road inspection centre.

Additionally, all the vehicles will be required to obtain a clearance report from the authority before they are allowed to resume operation.

The latest follows reports that a female passenger Judy Wanjiku Nyaga was pushed out of a moving vehicle operated by the sacco, leading to her eventual death.

Police officers launched manhunt for the driver and the tout of the Matatu on Monday.

A statement from the National Police Service said the duo are still at large.

“Our attention has been brought to an unfortunate incident where a lady was allegedly pushed out of a moving vehicle in Juja. The vehicle KCZ-729C has been detained in Wanguru Police Station in Mwea,” NPS said on Twitter.