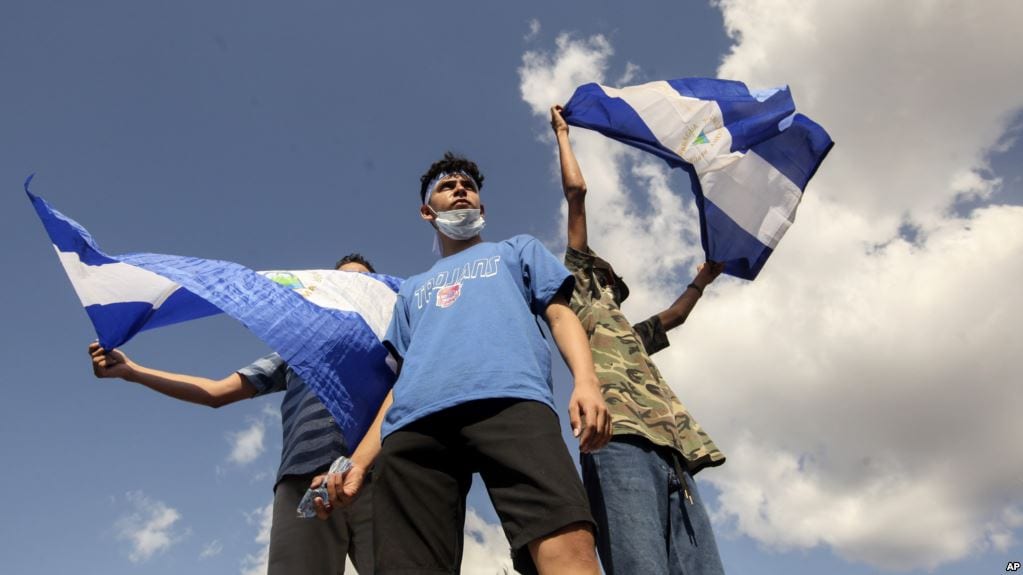 Nicaragua on Friday released another 50 people jailed for protesting against President Daniel Ortega’s government, bringing the number freed since late February to about 200 in a unilateral action separate from a broader deal covering hundreds considered political prisoners.

However charges were not dropped against the demonstrators, who were accused of “disrupting the public order and attacking the peace in Nicaragua.” Instead they were for the most part transferred to a form of house arrest, short of the unrestricted freedom that the opposition has demanded in negotiations with government representatives.

“Being at home I feel free,” said freed student protester Franklin Rodrigo Artola Garcia. “I feel happy to be with my mother, with my father, all my family. … And I am going to remain in the fight because Nicaragua must be free and it has to be 100 percent pure, zero corruption, zero murderers.”

Opponents of Ortega have said more than 640 people were being held for political reasons, jailed in protests that broke out a year ago against the government. Ortega officials say the actual number is far smaller.

Luis Alvarado, alternative representative from Nicaragua to the Organization of American States, said the prisoner releases are “proof of the commitment of the state and government of Nicaragua with the agreements reached so far” in the talks.

Documents signed in the recent talks between the government and the Civic Alliance opposition coalition call for the International Committee of the Red Cross to propose an updated list of prisoners who should be freed by mid-May.

Friday’s released caught both the ICRC and the opposition by surprise.

“The ICRC is not involved in the liberation … announced today,” said Alberto Cabezas, a Mexico-based spokesman for the organization.

Azahalea Solis, a leader of the Civic Alliance and negotiator at the talks, said Thursday had her group received a “reconciled” list of people considered political prisoners.

“We were not advised” about Friday’s releases, Solis said. “We had agreed to implement the exit of the prisoners according to what was agreed with the government and the Red Cross.”

She added that the unexpected releases create confusion because “now we will have to review all the lists again.”

According to a list provided by the Interior Ministry, those freed include students, farmworkers and professionals arrested for taking part in the protests, which erupted last April over a social security reform and broadened to demand Ortega leave office. They were released to families in the capital, Managua, and other cities.

“Those who are seated at the negotiating table, may they continue to be firm on the issues they are raising and demanding,” said Jeffry Ortega, another student released Friday. “And may the president cease the repression and let things be as they were before.”

The ministry did not specify whether all 50 were among those deemed political prisoners by the opposition.

Solis said not all of those released were under house arrest, and some had different legal status and some left jail “without documents.”

In Washington, Joel Hernandez, rapporteur on the rights of persons deprived of liberty for the Inter-American Commission on Human Rights, called for a complete accounting of those arrested that is agreed upon by all parties.

“The commission believes that the release process must be ordered, expedited, transparent and offering certainty on the legal status of those freed,” Hernandez said.

The releases came two days after the conclusion of negotiations between the government and the opposition where Ortega’s representatives committed to “complete” release by mid-May of protesters, some of whom have been behind bars for nearly a year. The government also agreed to the nullification of trials, convictions and outstanding arrest warrants.

“We continue to work to reach consensus and agreements on the matters of truth, justice, reparation and no-repetition, as well as … democracy and electoral reforms that constitute the basis for holding elections according to the constitution of Nicaragua,” said Alvarado, the Nicaraguan envoy to the OAS.

Also Friday, police announced that an opposition march called for Saturday would not be authorized. The government imposed a de facto ban last year that essentially quashed all anti-government demonstrations, though some smaller ones have been seen recently since the talks began.

A police statement acknowledged that protest is constitutionally protected but said National Blue and White Unity, a coalition to which the Civic Alliance belongs, “does not have legitimacy to hold gatherings” and was “involved in serious disturbances of public order” in previous weeks.

The coalition later dropped its plan for a march, which it had said earlier that it called in the context of an agreement during the talks that the government would commit to restoring freedoms of the media, expression and public mobilization.

The Civic Alliance has said that 779 people were arrested because of the protests, while a truth commission formed by the government says there were 261. Ortega officials have accused protesters of being “coup-plotters” and “terrorists” bent on toppling his government.

According to the Inter-American Commission on Human Rights, at least 325 people died in the unrest, 2,000 more were wounded and at least 52,000 fled the country for exile.