MWANGI: Of crooks and Chinese cash: will the mix create jobs? 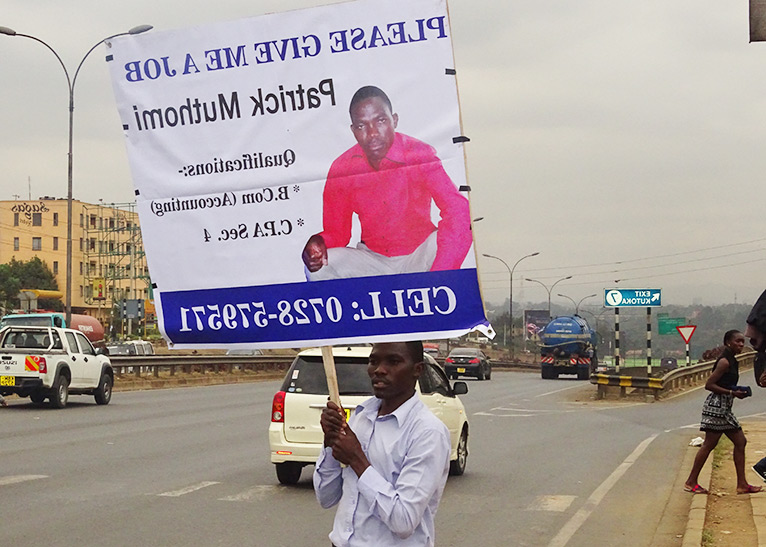 A young man in Nairobi caught the nation’s imagination – and vividly displayed the frustrations of the youth – when he took to carrying a billboard on a busy highway in his efforts to secure employment.

Patrick Muthomi, a Bachelor of Commerce graduate of a local public university, was quickly offered a job as an accountant by Chandaria Industries. His plight, however, reflects the desperation of hundreds of thousands of graduates in Kenya – and the rest of East Africa as well – whose hopes of white-collar jobs and the good life are quashed soon after obtaining their qualifications.

It is an indication of the failure of successive regimes in the region to implement policies that would encourage inclusive growth and job creation. The hopelessness has contributed to the increase in drug consumption, alcoholism, crime, slums, and general poverty.

Yet, this hopelessness has been created more by a lack of visionary leadership than resources. Part of the response by leaders, for instance, has been to come up with giant infrastructure projects that they claim help in creating jobs.

But such a strategy is extremely shortsighted. It would force the government to be constantly building one major infrastructure project after another in order to keep the growing youth population engaged. That in turn implies a never-ending stream of debts to finance these mega projects, thereby committing most of our resources to repayment of external debts and saddling future generations with a burden not of their making.

Trying to escape from stringent loan conditions imposed by their traditional Western allies, African tinpots have been running to China, begging bowl in hand. Trouble is, the Chinese are not any more benevolent than the West. They pursue their own national self-interest: Loans must be repaid, with interest; they obtain cheap access to Africa’s natural resources; and they export their excess labour and growing population to Africa.

Turning to the Chinese has therefore led to fewer jobs for local populations than should otherwise be the case. While it is understandable that certain skilled personnel would be brought in, the aim should always be to develop local capacity. That aspect has been lacking, and the Chinese are all too happy exporting their surplus population to work on projects in Africa.

This has often led to clashes with local communities. The Standard Gauge Railway is a case in point, with the Maasai staging protests and threatening to stop its construction through their territory unless they were offered jobs.

Moreover, in the absence of a national or public service ethic, projects are synonymous with theft. The costing of any project is usually greatly inflated – and the quality of materials and workmanship compromised – in order to give room for “eating.” The overriding aim of these projects is therefore not to do something for the public good, but to create an avenue for financial malfeasance.

Perhaps this explains why the Kenya government opted to proceed with the construction of a new railway despite the fact that Uganda has been non-committal on the project. That, automatically, also makes it unfeasible for Rwanda to proceed with its share of the project. Given these circumstances, it is difficult to see any economic benefit that will be derived from the SGR will serve, beyond Jubilee making a political statement.

Indeed, in the absence of co-operation from our neighbor to the west, upgrading of the existing narrow gauge railway would have been the better choice. The enormous resources spent on the new railway would have been sufficient to revive and set up industries and programmes that would employ millions of people in a sustainable manner.

Moreover, the obsession with projects – where young people are offered jobs as manual labourers – ensures our people remain at the bottom of the heap. It is a poor reflection of the region’s leadership that we seem preoccupied with creating such jobs.

But the myopic leadership in our institutions cannot even get it right when it comes to training of high-level manpower. While public universities are all involved in massive expansion ostensibly to enable more citizens access higher education, the truth is that this expansion is simply an avenue for siphoning public funds.

As this expansion proceeds, existing broken-down facilities are not fixed, numbers of qualified staff are insufficient, and the part-time staff who sustain academic programmes are made to go for months or even years without pay. At the Jomo Kenyatta University of Agriculture and Technology in Juja to the north of Nairobi, students are now even compelled to purchase Taifa laptops from the institution upon admission – essentially a rip-off as the learners are not given a choice.

These are all the wrong conditions in which to create wealth and employment. Certainly, it won’t take long before our economies hit a dead end. One shudders to think what that will mean.