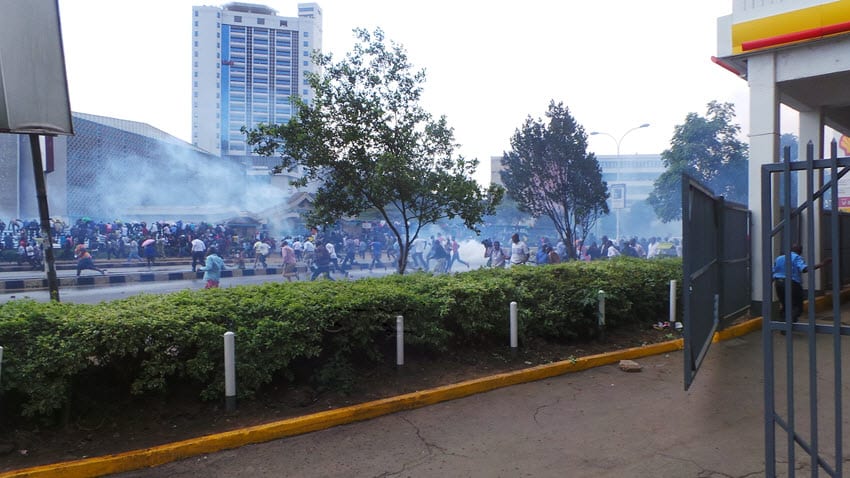 The date 16 May, 2016 will not be easily forgotten by residents of Nairobi. On this Black Monday, a rogue police force unleashed terror on peaceful demonstrators, a throwback to the country’s dictatorial past.

The new tendency for leaders in the region to employ state thuggery is not limited to Kenya. Ugandans have experienced the same oppression under the rule of President Yoweri Museveni. The Kenyan leadership is apparently testing the waters, borrowing a leaf from their western neighbour. But that is proving quite complicated.

The rising political temperatures in Kenya – well over a year before the General Elections scheduled for August 2017 – are dramatically destroying the new political culture that the drafters of the country’s new Constitution had envisioned. In its place, a culture of violence, manipulation of institutions and deep ethnic suspicion is fast taking hold.

But what are the facts precipitating the current wave of violence? The Chickengate scandal implicating senior officials at the Independent Electoral and Boundaries Commission (IEBC) is a good starting point. While their foreign accomplices languish in a London jail, Kenya’s officials continue to discharge their duties. Their mention in this scandal, alone, raises issues of integrity that should have forced them to relinquish such an important duty as overseeing an election.

At the last election in 2013, the opposition Coalition for Reforms and Democracy (CORD) garnered millions of votes, and was only a few hundred thousand votes short of those garnered by the ruling coalition – which was still a disputed outcome. It appears quite inconceivable, logically, that the same coalition could not raise a mere one million signatures for its Okoa Kenya campaign to alter certain aspects of the Constitution, raising suspicions of impartiality on the part of IEBC.

Given these facts, it shouldn’t really matter whether the IEBC commissioners are guilty of all the allegations levelled against them or not. The fact is that a major stakeholder commanding a significant chunk of the country’s voting population has lost confidence in them. They cannot, therefore, serve as arbiters to the coming electoral contest and should have simply bowed out honourably.

But the culture of voluntarily leaving power in response to the people’s wishes is quite foreign to Kenya, and East Africa as a whole. The Prime Minister of Iceland resigned earlier this year simply for being associated with a foreign account in a tax haven, which attracted demonstrations.

Failing such peaceful change, the people always hold the final card. In Egypt, Hosni Mubarak was pushed out of power and into the courtrooms by the power of street demonstrations. It is a situation that could easily be replicated in East Africa.

In any half-decent democracy, such a shameless show of force as was seen in Nairobi would be sufficient to send the government packing. If they delay, it would also lead to massive protests as the people seek to assert that sovereignty cannot be taken away from them.

It speaks volumes about the callousness of the political leadership – and the ethnic balkanization in Kenya and other East African societies – that leaders under whose watch atrocities are committed against the people can continue to sit pretty, even attempting to justify gross human rights violations.

The Kenyan leadership does not seem to realize – and other governments around East Africa as well – that the days of old-style dictatorship are long gone. The cold war that enabled despots to thrive all over the world is no more. We live at a time of heightened awareness, too, with technology fast enabling people everywhere to know what is happening in every corner of the world. The citizenry are more emboldened, too, and will not meekly accept whatever injustices are meted out against them.

Dictators, however, are also realizing that the international community is softening its stand. Apart from an occasional lecture from Western countries, most world powers are happy to do business with the emerging tin-pot despots in Third World countries. They can change constitutions to extend term limits, rig elections, and brutalize their people with little fear of international sanction.

In these circumstances, only the people themselves – in the fashion of the Arab Spring – can reclaim their dignity and bring violations to an end. This will take the coordinated efforts of a significant mass of people who have been liberated from ethnic and other partisan biases.

Creating this mass of people is a big challenge, but Kenya appears headed there. While some still see a Kikuyu-Luo divide in the current conflict, this is rapidly changing. The social contradictions within East Africa’s economic powerhouse are slowly creating the conditions necessary for social upheaval and eventual revolution; and that could be pretty soon.