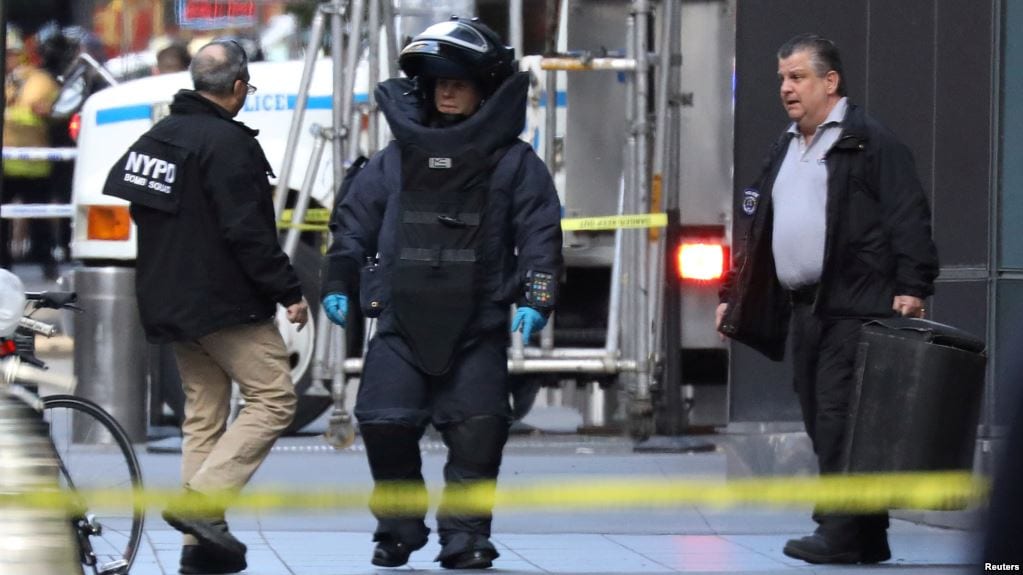 Clapper said on CNN early Friday he was not surprised he was targeted and said the incidents were “serious.”

Federal investigators searched a massive U.S. mail sorting facility in Florida late Thursday, after determining that at least one of the pipe bombs was processed there.

A report in the Miami Herald says the package that ended up in the office of U.S. Representative Debbie Wasserman Schultz is “likely” the package in question, according to a federal law enforcement official familiar with the case.

Before arriving in Schultz’s office, however, the mail bomb was initially sent to the office of former U.S. Attorney General Eric Holder in Washington, but was not delivered and was sent to the return address, which was Schultz’s address. It was processed through the massive Opa-locka mail sorting facility in Florida, The Herald reports.

Investigators are expressing confidence they will identify who is responsible for sending the 10 pipe bombs.

“We will identify and arrest the person or people responsible for these acts,” New York City Police Commissioner James O’Neill told reporters Thursday.

All of the “suspected explosive devices” were being taken to the Federal Bureau of Investigation’s laboratory at the U.S. Marine Corps base in Quantico, Virginia, O’Neill said.

“We are discovering things by the hour,” he added at a news conference where other officials also said tips from the public were providing leads for investigators.

FBI Assistant Director William Sweeney, who is in charge of the bureau’s New York field office, said “the investigation is still in its early stages,” thus he would not provide specific answers to the media about possible suspects or whether the pipe bombs were properly wired to explode.

Investigators are specifically looking at the southern part of the state of Florida as a source of some of the packages, according to media reports.

U.S. President Donald Trump is largely blaming the media for the angry political atmosphere in America that critics contend has led to what is being regarded as a wide-scale assassination attempt.

What police described as a live explosive device that arrived in an envelope addressed to Brennan at CNN’s New York bureau prompted the evacuation of the Time Warner Center for hours on Wednesday.

Pressed by reporters Thursday on whether there could be a link between Trump insulting political opponents and the dispatch of the bombs,White House Press Secretary Sarah Sanders replied, “the president is certainly not responsible for sending suspicious packages to someone no more than (Democratic Party U.S. Senator) Bernie Sanders was responsible for a supporter of his shooting up a baseball field practice last year.”

Throughout the day on Wednesday, leaders from both the major parties called for a return to civility in the political arena.

The Secret Service says the package addressed to Clinton was discovered late Tuesday, intercepted at a mail screening facility near her home in a New York suburb where she lives with her husband, former President Bill Clinton.

A separate package addressed to Obama, according to the Secret Service, was intercepted at a screening facility at Joint Base Anacostia-Bolling, a 365-hectare military facility in Washington.

California Congresswoman Maxine Waters was sent two suspect packages, one intended for her office in the nation’s capital and the other for her home district office. The first was intercepted at a congressional mail sorting center in the state of Maryland, and the second discovered by postal inspectors at the Los Angeles Central Mail Sorting Facility.

The first in the series of explosive devices was found Monday in a mailbox outside the New York home of billionaire philanthropist George Soros, a major donor to Democratic candidates.