Man assaults nurse who vaccinated his wife against Covid-19 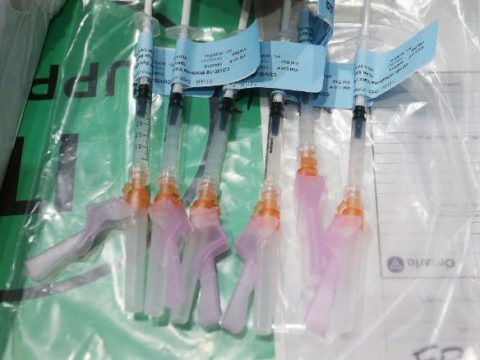 Police are looking for a man in Canada they say punched a nurse in the face multiple times, knocking her to the ground after she administered a Covid-19 vaccine to his wife without his permission.

On Monday, around 9:15 a.m., a man walked into a Brunet Pharmacy in Sherbrooke, a city in southern Quebec, and accused a nurse in her 40s, who police have not named, of vaccinating his wife, Sherbrooke Police spokesman Martin Carrier told CNN.
“Right at the beginning, the suspect was very angry, very aggressive, he asked the nurse why she vaccinated his wife without approval, without his consent,” Carrier said. “And he punched her right in the face multiple times so the nurse didn’t have the time to defend or explain herself … and she fell to the ground and the suspect left running out of the drugstore.”
There are no laws in Canada that say individuals need their spouses’ permission to get vaccinated, and it is unclear if his wife had given consent.
The nurse was taken to a nearby hospital by ambulance where she was treated for the “multiple injuries to the face” he said.
Justin Trudeau pelted with gravel by protesters at campaign stop
Justin Trudeau pelted with gravel by protesters at campaign stop
As a result of the incident, the pharmacy told CNN partner, CBC, that they suspended vaccinations. CNN reached out to the pharmacy but they refused to comment on whether or not vaccinations were being administered Thursday.
Brunet Pharmacy’s parent company, The Jean Coutu Group Inc., also declined to comment but told CNN they “fully condemn this act which is unacceptable towards the pharmacy teams who have been providing essential services since the beginning of the pandemic.”
Canada has vaccinated 69.8% of its population, surpassing the US by 15.6%, according to data from Our World in Data, seen in CNN’s vaccine tracker.
Although most Canadians have welcomed public health measures and the country has one of the highest vaccination rates worldwide, case counts and hospitalizations are on the rise, according to the Public Health Agency of Canada, especially among younger, unvaccinated Canadians.
'Frozen in time': Lobbyists, lawmakers and mayors plead with the White House to ease Covid travel restrictions
‘Frozen in time’: Lobbyists, lawmakers and mayors plead with the White House to ease Covid travel restrictions
Police do not have a name or photo of the suspect or security footage of the incident, Carrier said. They do however have a description of the man and are hoping with the public’s help, they’ll be able to identify him and charge him with assault.
The suspect is described as, 30 to 45-year-old-man, 6-feet tall, medium build with darker skin, short brown hair, thick eyebrows, two small ear piercings on each ear and a tattoo on his hand that appeared to be in the shape of a cross, Carrier said.