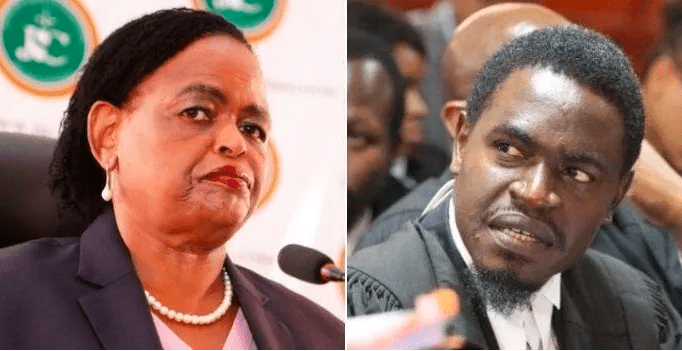 The tussle between the nominee for Chief Justice Martha Koome and Law Society of Kenya President Nelson Havi intensified on Monday after Havi dared Koome to do her worst, as he vowed not to apologise or retract the  memoranda he presented to the Judicial Service Commission (JSC) during the recent interviews.

In his memoranda, Havi had questioned Koome’s handling of three cases saying she was  influenced by nepotism, favouritism and improper motive and that she often ruled in favour of the Executive.

In his letter to Koome’s lawyers, Havi alleged a plot to intimidate him against questioning Koome’s suitability ahead of her second round of vetting by the justice and legal affairs committee which has already urged the public to submit information on her suitability.

Koome had given Havi seven days to apologise or she would initiate a law suit for libel and defamation.

In respose, the LSK president dismissed Koome’s ultimatum saying he will not withdraw the memoranda neither would he apologise or admit liability. Havi maintains that the contents of the memoranda were true.

The Havi memoranda to JSC had questioned Koome’s handling of three cases, one between the the National Cereals and Produce Board (NCPB) and Erad supplies in 2012, a night sitting of the Court of Appeal on the eve of the repeat presidential election in 2017 and an appeal by the LSK on the election of its male representative to the LSK. Some of these matters were brought up during her vetting by the JSC panel.

In his response to Koome’s demand letter, Havi further alleged that the demand letter was meant to intimidate him and bar him from submitting additional memoranda to the Justice and Legal Affairs committee which last Friday put out a notice inviting the public to submit information on Koome’s suitability ahead of her vetting due May 13th.