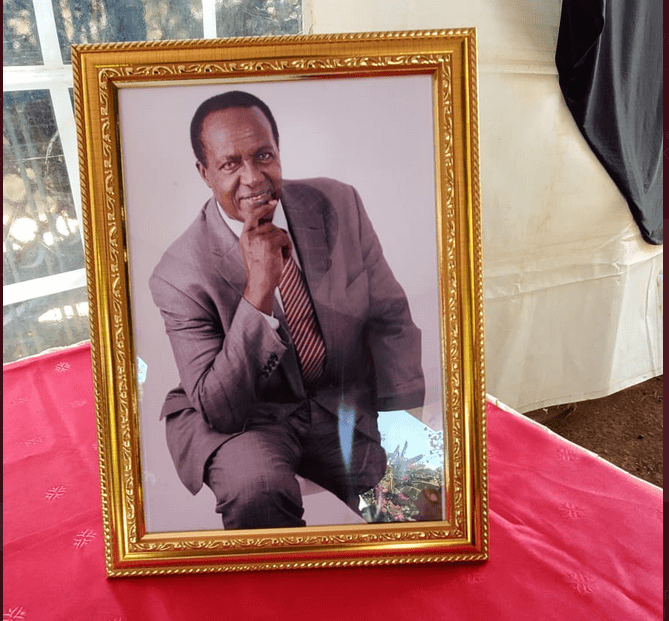 Kiambaa MP Paul Koinange who died early Wednesday from COVID-19 complications has been interred at his Kiambu home in a private ceremony, attended by family and close friends.

Emotions ran high as family and friends took to the podium in flowing tributes to the late MP.

His first wife June Koinange in her tribute said she will fondly remember how the MP cared and took great pleasure in traveling around the country with his family.

In her tribute, Mrs Koinange attributed her career success while working for the United Nation both in Sudan and in Nairobi to the support from her husband.

She also remembered her stint spearheading a Peace Treaty in South Sudan and how her husband had been instrumental it how it came together.

“He also forwarded my name to the Italian Government when they were looking for someone to spearhead a Peace Treaty in South Sudan and I finally got the job as the only woman, ” she reminisced.

His second wife, Mary Koinange praised her late husband as a God-fearing man who was dedicated to his job, committed to his family and who devoted help to those he knew and those he didn’t.

“I had the opportunity to the wife of the most kind, charming and most God-fearing man I know, he genuinely cared for people he knew and those he did not know, most people called him chairman, or mheshimiwa but to me, he was just Paul, my husband,” she said.

Governor Nyoro praised the late Koinange as his political mentor, remembering him as a humble, dedicated and meek leader whose service went beyond Kenya.

Governor Nyoro said the two main projects that the late MP was pursuing- the Ruaka dam and the Gachie-Kihara-Gacharage to Karura road- will be completed before May.

“These projects although he did not see them become a reality will still be his projects, and we promise they will be completed before May,”  Governor Nyoro said.

The Kiambu Governor also praised the late legislator as a big supporter of President Uhuru Kenyatta who was at the forefront in support of the handshake and in extension the Building Bridges Initiative (BBI) to the end.

“If you can remember, Koinange my brother was always in Siaya, Homa Bay discussing the Handshake and the BBI, ” Governor Nyoro adde

Oburu Odinga who represented his brother-the former Prime Minister Raila Odinga-remembered how the two leaders were battling COVID-19 at the Nairobi Hospital.

“Raila is not here with you, but he would have loved to, he was very close to our departed brother, I would like to tell you that he was in bed together (sic) with our brother suffering from the same disease, our hearts go out to his family at this trying time,” Oburu said.

The legislator succumbed to Coronavirus-related complications at Nairobi hospital on Wednesday morning.

Until his death, Koinange served as the Chairperson, Departmental Committee on Administration and National Security in the National Assembly.