Ksh200M was used to remove me from office – Former CS Waiguru 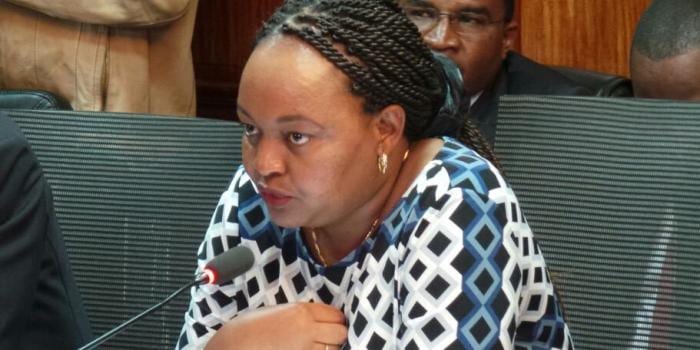 A plan to remove Anne Waiguru from office was hatched by cartels, which were close associates of businessman Ben Gethi, the former Devolution Cabinet Secretary has revealed.

Though she refused to give names of the individuals behind the scheme, Waiguru told the Public Accounts Committee on Thursday that the push for her removal was because of her resolution to stop the theft of public funds and inflation of NYS budgets.

“The scheme to remove me from office was orchestrated by people who felt aggrieved by my move to crack down on corruption at the NYS.”

“An amount totaling Ksh200 million was used to run a campaign even on social media and newspapers to manipulate the public into believing I was behind the loss of money at the NYS,” said Waiguru.

Waiguru also sympathised with businesswoman Josephine Kabura whom she said was allegedly being used by puppeteers to spearhead a smear campaign against her, saying it was only a matter of time before she is “dumped”.

“From the submissions given by those who have appeared before this committee, it is evident that some people have set out to link me to the loss of money at NYS.”

“The question is who are these people and why are hell-bent to link me to the scam?” she questioned.

Waiguru said that the war waged against her runs deep with the perpetrating of the NYS scam sponsoring hashtags on Twitter to taint her name.

The former CS said that a week to the closure of investigations into her alleged role in the NYS scam by the Ethics and Anti-Corruption Commission (EACC), unidentified individuals drafted an affidavit for Kabura to present to the EACC and leak it to the media in a bid to stop her re-appointment into the cabinet.

Waiguru also ruled most of the allegations against her to be untrue, rubbishing claims that she assisted political analyst Mutahi Ngunyi get a consultancy tender at the NYS, and that she deliberately removed former NYS Director General Nelson Githinji from being an AIE holder and replaced him with Adan Harakhe to pave way for looting.

She claimed that despite being stripped of the AIE holder’s role, Githinji still maintained access to the Integrated Financial Management Information System (IFMIS) thus was able to control transactions.

Waiguru stated the NYS scandal might have run deeper in the ministry since the process of approving transactions went through close to seven people.

During the entering of LPO amounts into the IFMIS system, Waiguru said zeros were added thus inflating the budgets to benefit those behind the scheme.

Reference was made to a project in Kibera where a 3km road was contracted for Ksh35.5 million per kilometre while another project of building a toilet in Kibera was quoted at Ksh2 million.

Attempts by the committee chair Nicholas Gumbo (Rarieda MP) to have Waiguru take responsibility for the loss of NYS money was futile, as she remained adamant that she did her best to stop further theft.

“We were able to stop the theft of Ksh695.4 million and it is during that time that we realized Ksh791 had already been stolen,” she said.

“The bile that most of those that have been probed by the committee have been spewing is because I called the police on them. I cannot take responsible for the theft at NYS.”

Despite the troubles that faced NYS, Waiguru called on Kenyans not to give up on the project, saying it had been recognised as the second best youth project in Africa.

She noted that through NYS projects, the lives of several youths have been transformed with most of them starting businesses to support themselves.

Waiguru called on the committee to probe the issue further and bring to book those behind the scheme.