Kenya to source for Ksh.806 billion towards climate change mitigation 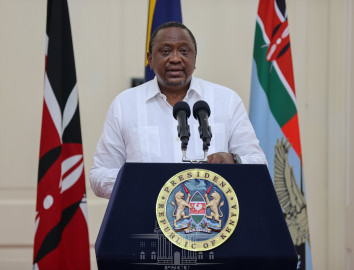 Kenya will be forced to raise Ksh. 806 Billion shillings in 9 years for reduction of green house gas emissions by 32 percent by the year 2030.

President Uhuru Kenyatta made the announcement as he officially opened the 7 devolution conference whose focus will be on mitigating the effects of climate change.

Leaders from both national and county governments urged to commit to allocating resources towards combating climate change.

In a virtual address to delegates as he officially opened the seventh and final annual devolution conference, President Kenyatta disclosed that Kenya was meant to domestically mobilize 13 percent of 6,874 billion shillings to at least reduce the country’s greenhouse gas emissions, calling on counties to work with the national government in allocating climate change financing resources.

“During the conference in Glasgow,  it emerged that only 6 counties had commenced the process of setting aside funds for climate change mitigation, while 33 counties had already passed legislation to support climate action,” President Uhuru Kenyatta said.

“Kenya has been ranked as the 31st most vulnerable country. 29 counties facing the risk of drought and famine,”

ODM leader Raila Odinga who was the chief guest at the event noted that climate change was a threat to life and the livelihoods of many as they were directly affected by the changes in weather.

Interior Cabinet Secretary Dr. Fred Matiangi, also in attendance said that effects of climate change had forced the security docket to review its modus operandi since it poses new challenge.

“What we are experiencing in Laikipia Baringo most of not rife is related to water livestock water source and pasture are all climate related, even what is happening at the north in our borders,” Said CS Matiangi

Climate change politics also played out in the conference as politicians gunning for the top seat were challenged to stand and be counted by actively engaging in initiatives advocating clean energy.