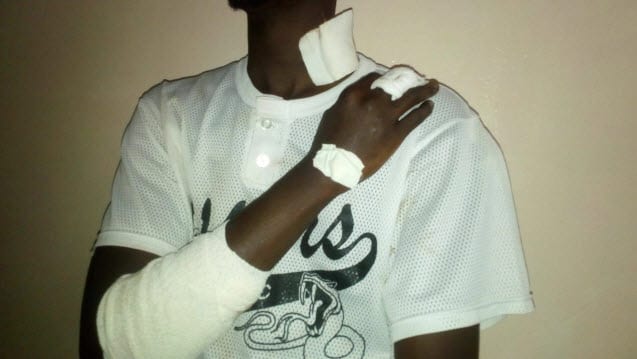 A JKUAT student is nursing knife and bite wounds after he was attacked and robbed while walking home with his girlfriend on Monday evening.

Shawn Kevin Mugendi, a third year student at the Jomo Kenyatta University of Agriculture and Technology, was attacked at Highpoint area on Thika highway.

The thugs were armed with knives and ordered the two to surrender their phones and money.

When Kevin resisted, he got stabbed and bitten.

The incident occurred barely a month after a first year student also from JKUAT was stabbed to death at Gachororo village, Juja Constituency.

Tabitha was in the company of another female friend when they were accosted by two thugs who demanded their valuables.

The deceased’s friend reportedly complied but Tabitha refused, prompting the gangsters to stab and violently rob her.

She was taken to the university hospital but declared dead on arrival ‘due to excessive bleeding’.

Varsity students are now pointing fingers at the authorities for not doing enough to protect students.