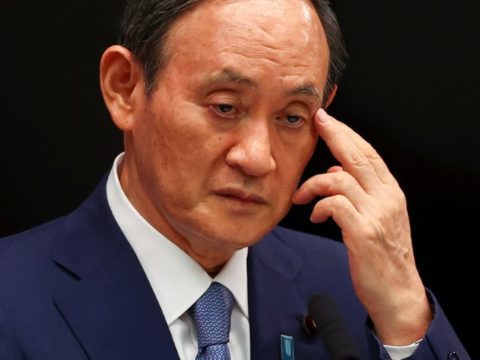 Japanese Prime Minister Yoshihide Suga on Friday said he will not run in his party’s forthcoming leadership election, effectively ceding the premiership and opening the race to other candidates after a turbulent term of less than a year.

Suga, who assumed the top role last September after his predecessor, Shinzo Abe, stepped down due to health issues, has seen public support slump as he struggled to contain Japan’s growing coronavirus outbreak.

“Working on Covid countermeasures and election activities requires a tremendous amount of energy, so I decided that I cannot work on both and should choose one of them,” he told reporters in Tokyo Friday. “My mission as a Prime Minister is to protect the life and livelihood of people, so I’d like to concentrate on this.”

He added that he will hold a news conference next week.

Suga’s decision not to stand in the Liberal Democratic Party (LDP) leadership election, scheduled for September 29, follows a tough 11 months in office marked by rising coronavirus infections and a slow vaccine rollout.

The winner of the LDP leadership election is widely expected to become Prime Minister, owing to the party’s majority in the lower house. A general election is scheduled to take place later this year.

Suga, 72, a farmer’s son and former cardboard factory worker, was considered a successful political operator with a reputation for being able to get things done.

He was elected LDP leader last September with about 70% of the votes. His appointment was widely seen as an effort within the ruling party to promote an image of stability and continuity between Suga and outgoing leader Abe. The two men had worked closely together during Abe’s almost eight years in office, with Suga holding the position of chief cabinet secretary in Abe’s government.

However, Suga failed to fully emerge from his predecessor’s shadow. His handling of the pandemic, in particular, has faced widespread criticism, with opponents lambasting his government’s slow and indecisive response.

But it was falling support within his own party that ultimately cost Suga his job, according to Koichi Nakano, a professor of political science at Sophia University in Tokyo.

Suga had tried to push the LDP “to submission … by hinting that he might even call a snap election in order to preempt the presidential election of the ruling party,” Nakano said.

“He then also was now supposedly working on the cabinet reshuffle and also the reappointment of key figures in the ruling party in order to showcase leadership, and on both counts he was seen as out of touch, and too high-handed.”

Last December, Suga dismissed the need for a coronavirus state of emergency — only to declare one for Tokyo and several other prefectures the following month. Before that, his administration encouraged domestic consumption with a much-maligned “Go To” campaign, which gave Japanese citizens steep discounts to travel. Experts have pointed to the campaign, which was eventually halted in December, as a likely driver in the spread of the virus across Japan.

Suga’s decision to push ahead with the Tokyo 2020 Olympics, despite warnings from health officials — including the country’s top coronavirus adviser — was also widely unpopular, with polls showing a majority of the public opposed holding a major sporting event during the pandemic.

Citing the Olympics in particular, Sophia University’s Nakano said Suga had been weighed down by Abe’s legacy. “The difficulty for [Suga] was that he was trying to leave his mark and also show that he’s an independent politician. But he was so constrained by the policy legacies that were left behind by his predecessor,” he said.

Though the scaled-down Games went off without any major incidents, Covid-19 cases surged to record levels this summer. Experts say holding the Games while Tokyo was under a state of emergency also sent conflicting messages to the public.

Even polls that showed public opposition to the Games softened when the Olympics began failed to give Suga’s popularity a boost among voters.
By August, his approval rating had slumped to a record low of 31.8% — while more than 65% of respondents said they didn’t want him to remain Prime Minister, according to a survey by Kyodo News.

Meanwhile, numerous states of emergency, including in Tokyo, have hurt businesses amid rising frustration over the apparent lack of a clear pathway out of the pandemic. Japan’s vaccine campaign has lagged behind other developed nations, seemingly held back by bureaucracy and logistical hurdles.