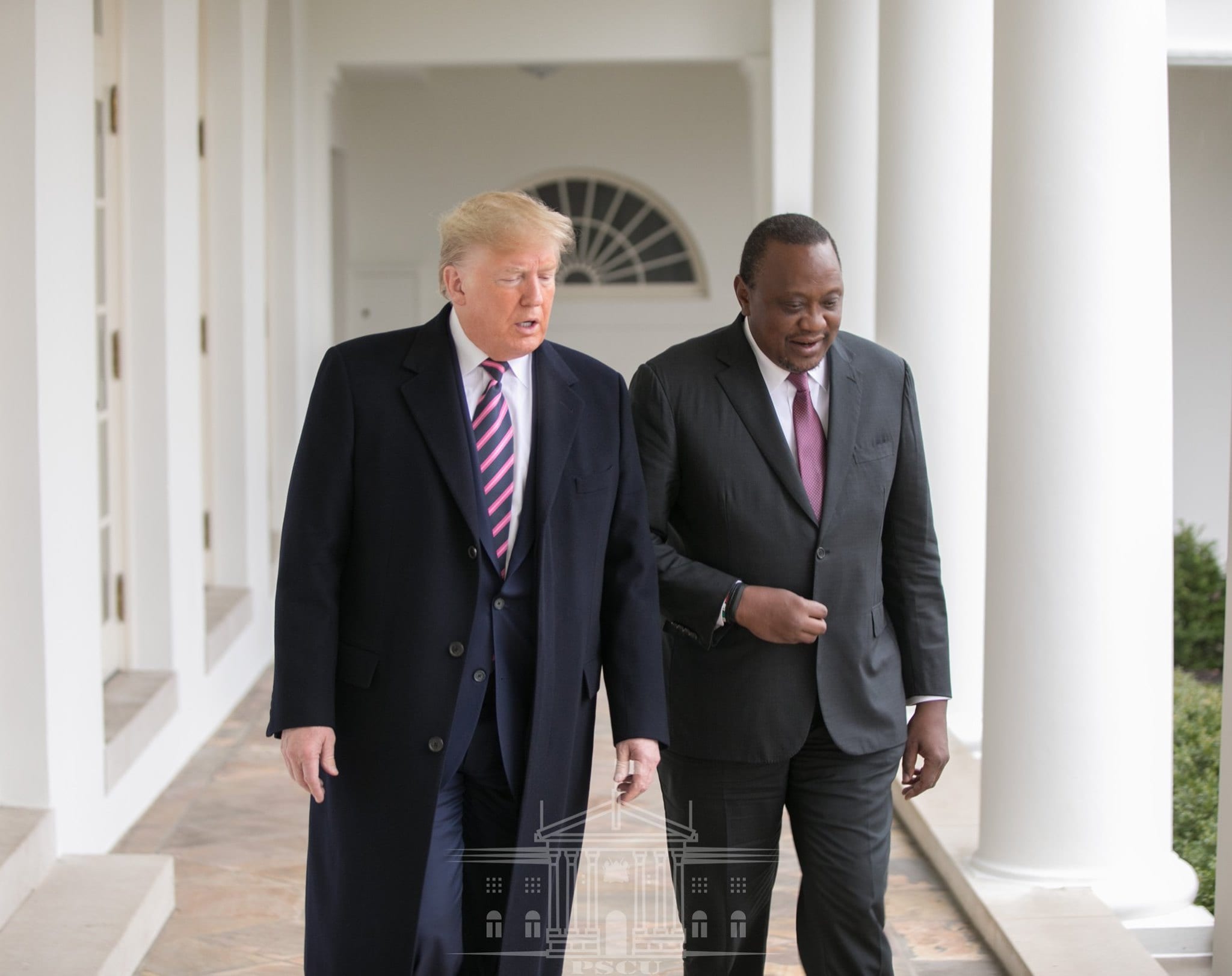 Kenya is a recognized leader across the continent, an important strategic partner of the United States, and there is enormous potential for us to deepen our economic and commercial ties,” said U.S. Trade Representative Robert Lighthizer. “Under President Trump’s leadership, we look forward to negotiating and concluding a comprehensive, high-standard agreement with Kenya that can serve as a model for additional agreements across Africa.”

Kenya is strategically important to the U.S., as the U.S. tries to offset the influence of China. China eclipsed the U.S. as Africa’s largest trading partner more than a decade ago.

Kenyatta’s visit to Trump’s White House is rare for an African head of state. Kenyatta met with Trump once before in August 2018, when as the White House said Thursday, “the two leaders established the United States-Kenya Bilateral Strategic Dialogue.”

The U.S. State Department announced Wednesday, however, that Secretary of State Mike Pompeo would visit Africa for the first time from Feb. 15 to 19, with stops scheduled in Angola, Ethiopia and Senegal.

Trade between the U.S. and Kenya stands at about $1 billion a year. Over 70% ($466 million in 2018) of Kenya’s exports to the U.S. entered under African Growth and Opportunity Act (AGOA).

President Kenyatta told the Kenya-US forum that his administration is committed to developing and concluding the strongest ever trade and investment framework that would deliver increased trade between the two nations.

“Today I want to assure all of you of Kenya’s unwavering commitment in developing the strongest ever trade investment framework with the United States of America.

“We are very keenly looking forward to concluding the trade arrangement between our two countries and I believe that these  trade agreements would not only serve Kenya and United States but  would probably set the base for a new engagement between the United States and  other African countries,” President Kenyatta said.

He dismissed speculation that Kenya is breaking away from its commitment to the African Continental Free Trade Agreement (AfCFTA) saying the new arrangement with the US is only aimed at bolstering and deepening trade not only with Kenya but also with other African countries.

“At this juncture I just want to put away a few doubts because there has been a feeling that by Kenya engaging with the US to have a trade arrangement, we are running away from our commitment to the African Continental Free Trade arrangement. And I want to assure you that there can be nothing further from the truth as that is definitely not the case,” President Kenyatta said.

The Kenyan Head of State pointed out that Kenya was among the first countries to sign and ratify the African Continental Free Trade Agreement (AfCFTA) and that its commitment to the agreement is steadfast.

He said Kenya needs to move faster and set the pace for other African countries in formulating new trade and investment arrangements with the US as the African Growth and Opportunity Act (AGOA) comes to an end in 2025.

“Let them see us as the people who are clearing the field for future negotiations with the rest of the African continent because Kenya feels ready for this arrangement,” the President said.

He noted that even as Kenya and the US work to strengthen their trade and investment ties, there is need to preserve and build on mechanisms and regulatory frameworks that already exist.

“As you may be well aware, the African Growth and Opportunity Act (AGOA) has been a key mover for trade between Kenya and the USA. Through AGOA, the US is the third export destination for Kenyan products, with a share of about 8 percent of total Kenya’s export globally.

“Moving forward, we need to maximize the remaining years of the African Growth and Opportunity Act (AGOA) that ends in 2025,” President Kenyatta said noting that the US is an important source of  Kenya’s foreign direct investments (FDI), with the country holding an FDI stock of over USD 405 million in 2018.

President Kenyatta challenged American businessmen to explore new investment opportunities in Kenya and assured them of an enabling business environment.

“We have a wide range of potential areas for investment and I urge US companies to consider investing in key sectors of the economy such as; Agriculture & Agro-processing, Manufacturing, Construction & Real Estate development, infrastructure development, ICT, Blue Economy, Energy, Hospitality & Tourism, Health, FinTech & Financial Services, Petroleum, Mining, among others,” the President outlined.

Executive Vice President and Head of International Affairs of the US Chamber of Commerce Myron Brilliant said the American business community is keenly following what President Kenyatta is doing in terms of improving trade between Kenya and the US and assured that the chamber will continue to support him by wooing more American investors to the country.

“We see your vision, we see your ambition, we understand what is happening in Kenya and we want to embrace it and support you,” Mr Brilliant assured the President.