How 2018 became the Catholic Church’s year from hell 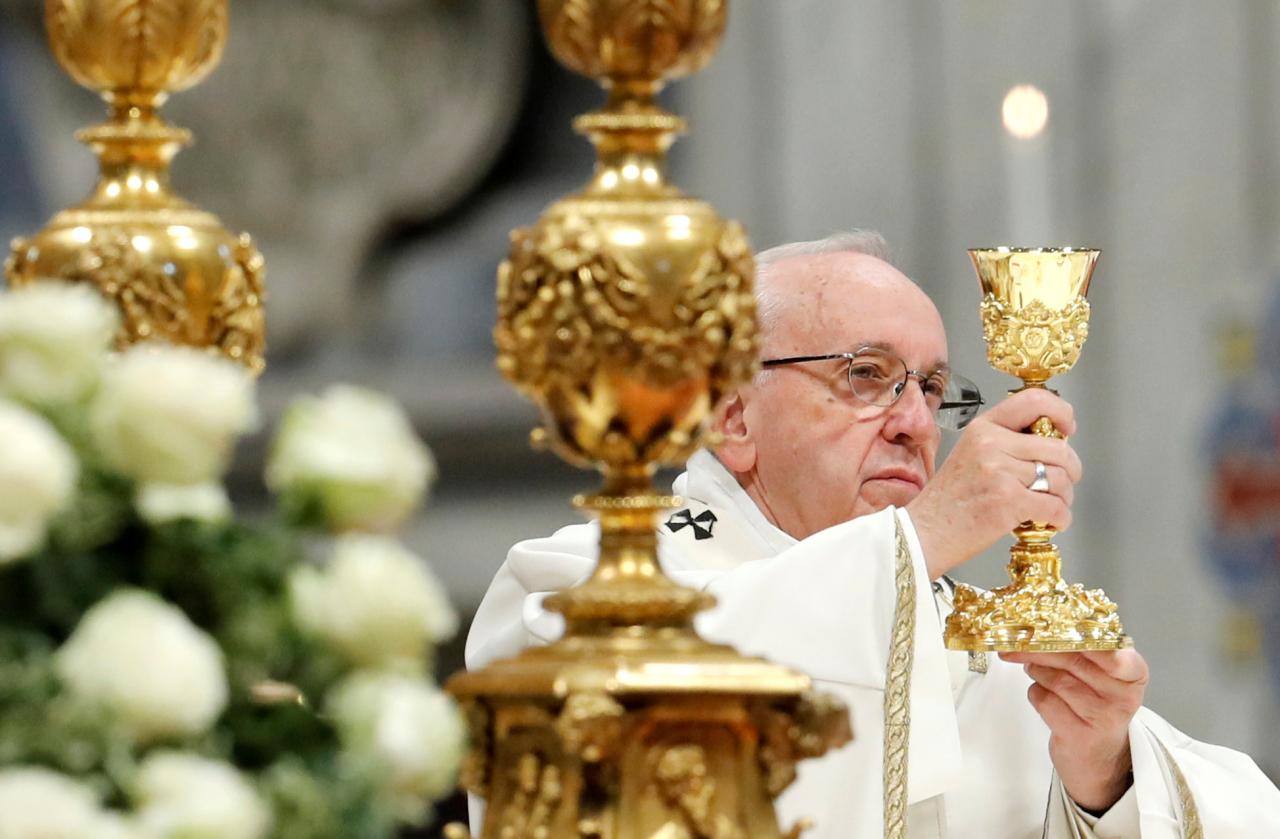 A prominent cardinal resigned in disgrace. Grand jurors accused hundreds of Catholic clerics of secretly abusing children. A former Vatican ambassador urged the Pope himself to step down.

It was enough for New York’s Cardinal Timothy Dolan to call it the Catholic Church’s “summer of hell.” The cardinal may have been overly optimistic.

In fact, the church’s hellish year began in January, when Pope Francis forcefully defended a Chilean bishop he had promoted. He later had to apologize and accept the bishop’s resignation.

But the clergy sex abuse scandal shows no signs of abating, with a federal investigation and probes in 12 states and the District of Columbia in the works.

The Pope has convened a meeting of bishops from around the world in Rome next February 21-24, saying he wants the church to tackle the scandal together. But lay Catholics and law enforcement officials appear to be losing patience with the church’s hierarchy.

The church’s institutional crisis was mirrored by individual soul-searching, as American Catholics questioned whether to stay in the church. 2018 saw parents challenging priests at Mass, prominent Catholics urging the faithful to withhold donations and parents worrying whether their children are safe in the sacristy.

One Catholic historian called it the church’s greatest crisis since the Reformation in 1517. Here’s a guide to how the Catholic Church got to this point in 2018:

January
The Pope began the year with an apology to sexual abuse survivors in Chile, where he aroused anger by saying he had seen no “proof” against Bishop Juan Barros, who has been accused of covering up for an abusive priest. Francis’ top adviser on the issue, Cardinal Sean O’Malley of Boston, called the Pope’s comments “a source of great pain” for survivors of sexual abuse by clergy. Barros denied the accusations and the Pope continued to defend him, even as he sent the Vatican’s top sex abuse adviser to Chile to investigate the allegations.

February
The Pope had received a letter from a Chilean abuse survivor in 2015, saying that Barros had witnessed a priest molesting teenagers, according to the author of the letter and another source. The news raised questions about whether the Pope had read the letter and what, if anything, he did about it.

April
In a dramatic reversal, the Pope admits he made “grave errors” in handling the accusations against Barros. After reviewing his investigator’s report on Chile, Francis said his previous comments were based on a “lack of truthful and balanced information.” The Pope later meets with three Chilean survivors of sexual abuse, including Juan Carlos Cruz, who says Francis told him, “I was part of the problem. I caused this and I apologize to you.”

May
Vatican treasurer Cardinal George Pell stands trial on multiple counts of historical sexual abuse in his native Australia. Pell is the most senior figure in the Catholic Church to face criminal charges for alleged assault. Also in Australia, Archbishop Philip Wilson is convicted of covering up sexual abuse, though his conviction was later overturned.

All of Chile’s 34 bishops offer to resign, after a three-day emergency summit at the Vatican. The simultaneous resignation of all the bishops in a single country is thought to be unprecedented in the modern history of the Catholic church. The Pope would later accept the resignation of seven bishops, including Barros.

June
Cardinal Theodore McCarrick, the former Archbishop of Washington and an influential voice in the church and international politics, is removed from public ministry by Pope Francis after a church investigation finds an allegation that McCarrick sexually abused a minor in the 1970s “credible and substantiated.” McCarrick said he had “no recollection” of the alleged abuse.

McCarrick is also accused of sexual misconduct with adults “decades ago” while he served as a bishop in Metuchen and Newark, New Jersey, the bishops of those cities said. Two of those allegations resulted in settlements, the bishops said, raising questions about how McCarrick rose through the church’s ranks despite rumors about his conduct. McCarrick has not commented on those allegations.

July
After more media reports accuse McCarrick of abusive conduct with seminarians and a young boy, Pope Francis demotes him from the College of Cardinals, a rare step. McCarrick is ordered to lead “a life of prayer and penance until the accusations made against him are examined in a regular canonical trial.” Pope Francis accepts the resignation of Australian Archbishop Philip Wilson, the highest-ranking Catholic official ever to be convicted of covering up sex abuse.

August
A sweeping report by a grand jury in Pennsylvania accuses more than 300 “predator priests” of sexually abusing more than 1,000 children in six dioceses since 1947. Though most of the accusations date back decades, before the church instituted new protocols, the report plunges the church into crisis, as Catholics across the country express outrage.

Two days later, a Vatican spokesman calls the alleged abuses detailed in the Pennsylvania report “criminal and morally reprehensible.” Pope Francis pens a letter “To the People of God,” in which he apologizes for the Catholic Church’s failure to protect children from abusive clergy. “We showed no care for the little ones; we abandoned them.”

During a visit to Ireland, where government reports have found widespread abuses by Catholic clergy, the Pope says the failure of church officials to address “these appalling crimes has rightly given rise to outrage and remains a source of pain and shame for the Catholic community.”

In an 11-page “testimony” released to conservative Catholic media, a former Vatican ambassador to the United States, Archbishop Carlo Maria Vigano, accuses Francis of ignoring his warnings about McCarrick’s conduct and calls on the Pope to resign.

The Pope declines to answer Vigano’s accusations, telling journalists to dig for the truth. New York’s attorney general issues civil subpoenas for all eight Catholic dioceses in the state to investigate how they handled accusations of clergy sexually abusing children.

New Jersey’s attorney general forms a task force to investigate allegations of sexual abuse by clergy and any attempted cover-ups.

September
Vigano unveils a new charge against Francis and other high-ranking Vatican officials: that they have told untruths about the Pope’s controversial meeting in 2015 with Kim Davis, the Kentucky clerk who refused to sign same-sex marriage certificates.
The Vatican announces that Pope Francis has summoned leaders of national bishops’ conferences from around the world to Rome to discuss the clergy sex abuse crisis, an unprecedented step in the history of the church.

A week after meeting with Pope Francis in Rome, leaders of the US Conference of Catholic Bishops say they intend to adopt new policies to hold bishops accused of abuse or cover-ups accountable.

More than 46,000 Catholic women sign an open letter asking Pope Francis to answer Vigano’s charges. Francis and his predecessor, Pope Emeritus Benedict XVI, remain silent on the matter.
A report from Germany’s Catholic bishops admits to “at least” 3,677 cases of child sex abuse by the clergy between 1946 and 2014.

October
The sex abuse scandal sends the Pope’s approval ratings among Americans to a new low, according to Pew Research Center survey.
Michigan authorities seize records from every Catholic diocese in the state as part of an investigation into possible sexual abuse by clergy.

Under pressure to respond to Vigano’s allegations, the Vatican says Pope Francis ordered an investigation last year into the accusations against Archbishop McCarrick, adding that the results will be released “in due course.”

Federal prosecutors in Philadelphia subpoena records from every diocese in Pennsylvania, the first federal investigation of that size into the abuse of children by priests and the cover-up of those crimes by Catholic leaders. The same federal prosecutor tells every Catholic diocese in the country not to destroy records pertaining to child sexual abuse.

Attorneys general in Washington, DC, and Virginia launch investigations into the Catholic Church’s handling of clergy sexual abuse.
A bishop in New York is removed pending an investigation into allegations that he sexually abused a minor. The bishop denied the allegations.

November
The Vatican dramatically intervenes in the US Catholic bishops annual meeting, instructing them not to adopt new policies to hold bishops accountable for misconduct and failing to protect children from sexual abuse.

Law enforcement officials in Texas raid the offices of Cardinal Daniel DiNardo of Houston, president of the US Conference of Catholic Bishops, looking for files related to a priest accused of abusing a minor. DiNardo’s diocese said it is cooperating with the investigation.

December
An Australian court overturns the conviction of Archbishop Philip Wilson, saying there was reasonable doubt that he covered up the abuse of children. Pope Francis removes three cardinals from his small council of advisers. Two have been the subject of allegations relating to sexual abuse or covering it up.

Four Jesuit regional provinces in the United States reveal that at least 230 Jesuits had been credibly accused of abusing minors since the 1950s. A fifth province will release its list of abusive clergy in January.

Illinois’ attorney general says the state’s six dioceses have failed to disclose accusations of sexual abuse against at least 500 priests and clergy members. In a speech to the Vatican curia, Pope Francis tells priests who abuse minors to turn themselves in to civil justice authorities and “prepare for divine justice.”