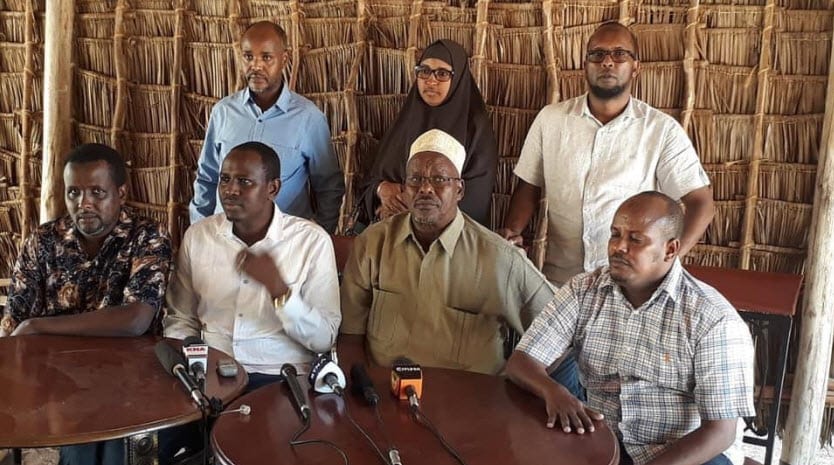 A day after Garissa Deputy Governor Abdi Dagane took to his Facebook account to accuse his boss Ali Korane for locking him out of key decision making in the day to day running of the county affairs, leaders from his backyard have come out to distance themselves from his statement.

In a long post on his account, Dagane lamented the lack of due considerations and consultation as among the issues that needed to be addressed by the governor for effective leadership.

They further urged the Deputy county boss to stop dragging the Samawadhal community into it.

“We are gathered here today to distance ourselves as a community from the deputy governors Facebook statement that he purported to be expressing on behalf of our community. We want to categorically dismiss the statement as personal,” said Masalani MCA Abubakar Shide.

“On the same strength we want to express our unwavering support for governor Ali Korane and his administration. We are happy with the way he is running the affairs of the county and at no given time have we felt isolated,” he added.

In his post, Dagane had said that: “… As a principal assistant and the most senior county official from the samawadal community, I would not bargain with anybody for the rights of my people and the programs that they’re entitled to…,”

Holugho MCA Adow Mohamed lashed out at Dagane saying that if he had any personal issues with his boss he should use the right channels to address them.

“We are shocked by the turn of events and even more so the manner in which he decided to express his frustrations. As a mature leader you try to consult widely before resulting to what the deputy governor did,” said Mohammed.

He further expressed dissapointement in the Deputy Governor’s actions saying that the community had picked him from the many candidates who had been presented because he seemed like he had the requisite qualifications for the job.

In his post on Facebook, the deputy governor claimed that there were still unfulfilled promises with little or tangible evidence to showcase .

“…Lots of anomalies and lack of due considerations and consultations are among the key issues that my boss should address for an effective leadership that is endowed with the blessings of the electorates…,” lamented Dagane.

Dagane further announced that he would be meeting elders from his community to chat the way forward.

“I am also planning to have a series of meetings with the entire Sama fraternity so that I clearly expound to them how far we have gone, why we are where we are and draw a clear map envisioned with better goals,” wrote Dagane.

Governor Korane’s community, Adduwak and Dagane’s clan formed a  pre-election coalition in 2017 which propelled them to victory.