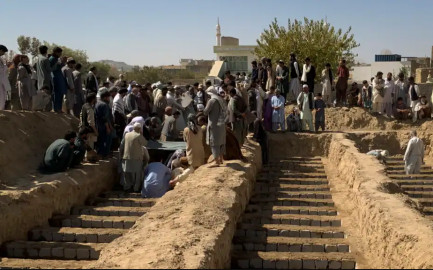 Funeral services were held Saturday for victims of Friday’s suicide bomb attack on a Shiite mosque in Afghanistan’s southern city of Kandahar that killed at least 47 people and wounded more than 70.

Islamic State’s Amaq news agency said late Friday that two of its members fatally shot security guards at the entrance to the mosque before blowing themselves up inside between two groups of hundreds of worshippers.

IS identified the attackers as Afghan nationals Anas al-Khurasani and Abu Ali al-Baluchi.

Taliban officials vowed to bolster security at Shiite mosques Saturday as hundreds gathered while the victims were buried by their families. Sixty-three graves were prepared, but a provincial Taliban official said the official death toll was 47.

United Nations Secretary-General spokesman Stéphane Dujarric described the attack in a statement Friday as “despicable” and said the attackers “must be brought to justice.”

In a statement Friday, the U.N. Security Council stressed the need to hold everyone involved in “these reprehensible acts of terrorism accountable and bring them to justice.”

It is the second consecutive week an attack occurred at a Shiite mosque and was claimed by IS. Forty-six people were killed in an October 9 attack on a mosque in northern Afghanistan.

The attacks are fueling concerns that IS, an adversary of the Taliban and the West, is enlarging its base in Afghanistan since the withdrawal of U.S. and allied troops from the country in August.