From watchman to MP: The inspiring story of Ken Okoth 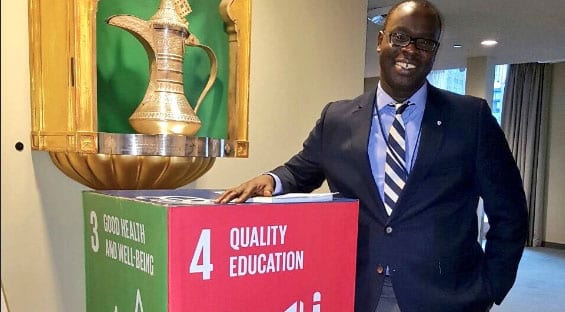 The 41-year-old had been battling with Stage 4 colon cancer and sought treatment in France.

His family made the announcement at a press conference on Friday at the Nairobi Hospital saying Okoth had been on life support after his condition worsened and suffered multiple organ failure.

Here is brief story of the late Ken Okoth.

His father abandoned his family–wife and six children, leaving his mother Angelina to bring them up as a single mum.

He grew up in Kibera: He told the Daily Nation in 2013; “I grew up in Kibra. We lived in a 10 by 10 hovel about 30 metres away from the railway line where the trains’ rumbles that ought to invoke danger were the norm.

Their home was flattened by bulldozers and they were forced to live out in the cold for days. “We were in the cold for a while before we moved to a two-roomed shack. We shared a toilet with five other families. Water was drawn from a communal tap outside.”

He went to Starehe Boys and Save the Children Fund salvaged his education and life: “After class eight and 613 out of 700 marks in the Kenya Certificate of Primary Education (KCPE) I was called to Starehe Boys’ Centre. Marks and background qualified me for a sponsorship that saw Save the Children Fund come to my rescue. I received a four-year full sponsorship… Figure what would have happened to me if the scholarship did not come along. I would probably have gone into bhang in those formative teenage years. Or I would have joined criminal gangs in the slum. I would probably be dead by now.”

Life was hard; he had to eat from trash bins and chose to remain in school over holidays. “Prior to secondary school, I had not known a three meal diet. Eating from the trash bins was just normal. I seldom went back home, choosing instead to remain at school studying and working.

The late Dr. Geoffrey Griffin from Starehe was his mentor. “They (Dr. Griffin and teachers) told us giving up was not an option and that education was meant to make one self reliant, regardless of the circumstances. Griffin was a great teacher and mentor. May his soul rest in eternal peace.

He sold newspapers during the day and was a watchman at night: “I went to The Nation newspapers where I had done voluntary work in the past and they allowed me to sell newspapers…. I delivered The East African every Monday in offices along Ngong Road all the way to Karen.”

“The Goethe Institute had meanwhile allowed me to study German almost for free. In return, I at times doubled up as a watchman at their Maendeleo ya Wanawake House premises.”

First time meeting Raila: “I first set my eyes on my hero, Raila at Olympic (Primary) when he visited and addressed us, the pupils. He told us nothing was impossible and gave the example of himself. He had just emerged from years in detention and won the Lang’ata parliamentary seat without the assistance of his famous father. The inspiration kindled a fire in me that burns to this day. When I decided to vie for the Kibra parliamentary seat, I drew confidence from the realization that it was tough, but not impossible.”

He responded well to treatment last year and his health improved but the condition could not be cured.

“Because my disease was discovered at a very advanced stage; it cannot be cured. It can only be managed,” he said.

“I could not afford the US because it was too expensive. My wife is from Europe, where the cost is more affordable and I could get a residence permit quickly for the duration of the treatment. Sadly, not everyone is as lucky; we need to make cancer care in Kenya a national priority.”

May his soul Rest in Peace.