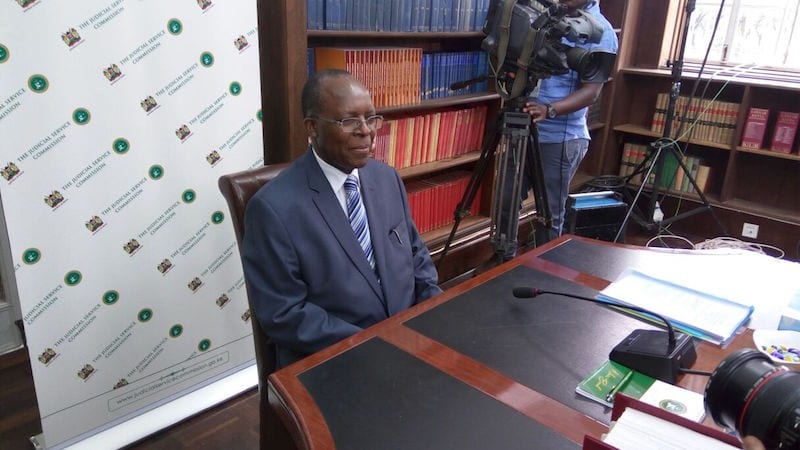 A heated debate ensued Thursday, September 15 during the vetting of the Chief Justice hopeful Jackton Boma Ojwang after Court of Appeal Judge Mohammed Warsame raised issues with a letter allegedly written by the former ‘inciting’ his Supreme Court of Kenya colleagues to go on a strike.

Warsame said that the content of the letter directly or indirectly indicated that the Supreme Court judges would withdraw their services in support of their two colleagues who were being ordered top retire upon attaining the constitutionally set age of 70 years.

Justice Ojwang, who was appearing before the Judicial Service Commission (JSC) vetting panel, lost his cool declining to respond to some questions by Justice Warsame and instead asking for the Chairperson’s protection.

Ojwang termed the questions by Warsame as not meritorious.

The JSC Chair, Prof Margaret Kobia, was forced to intervene, a move that angered Warsame turning the contest to the two with the latter arguing that Justice Ojwang needed no protection but to respond to all queries.

Prof Kobia asked Justice Ojwang not to answer any more questions from Warsame, but the Court of Appeal Judge stood his ground saying that the CJ candidate should and must answer all the questions.

Earlier, Ojwang was put on the spot about the link between his wife, Prof Colleta Suda, getting the position of Principal Secretary for Higher Education after the presidential election petition.

Suda was on the ODM nomination list for Senatorial position, but then quit politics and shortly appointed PS.

Regarding leaving his wife’s income out of his wealth declaration forms, Ojwang said she was not involved in politics.

“She only considered vying for the Senate in the last poll. She consulted constituents then abandoned it completely,” he said.

Ojwang was also put on the spot for failing to declare her wealth.

The JSC also claimed that Ojwang has never declared his wealth since he was appointed Judge of the Supreme Court of Kenya.

He was the last candidate to face the panel that is looking for Dr Willy Mutunga’s replacement following his retirement in June this year.