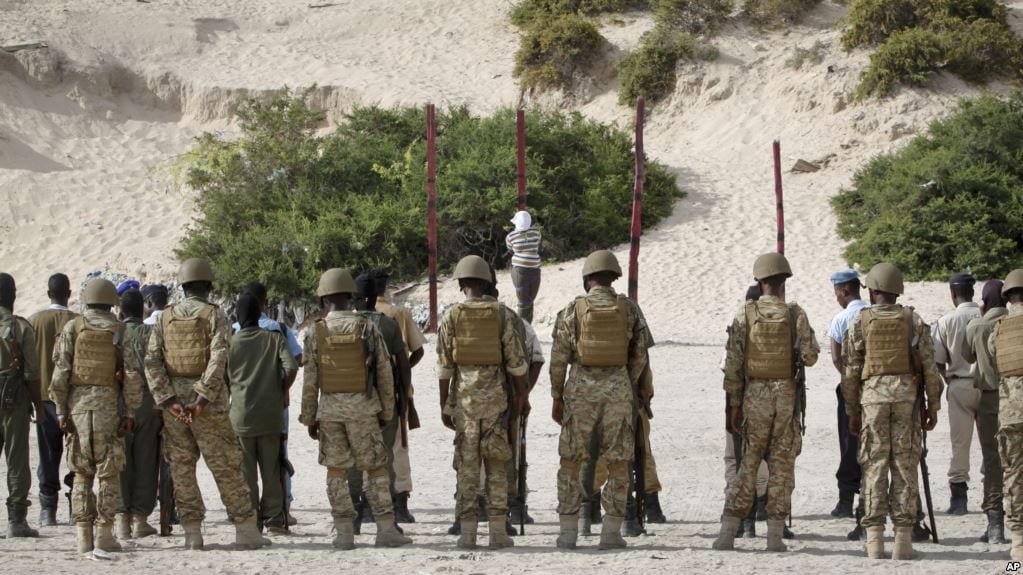 In Somalia, a country long troubled by deadly violence, there’s a disturbing new trend: an increase in summary executions.

Somali military courts and the militant group al-Shabab have each executed about a dozen people so far in 2017, all of them killed in public settings as crowds of between 30 and 300 people looked on.

While executions in Somalia are nothing new, the sudden increase has drawn the attention of human rights groups like Amnesty International as well as the local European Union delegation, which has asked Somali authorities to enact a moratorium on the death penalty.

Activists have been particularly critical of executions carried out by military courts, which they say are trying cases beyond their jurisdiction and failing to give defendants fair legal process.

The execution of five young men by firing squad in the semi-autonomous Puntland region on April 8 sparked the most controversy. Amnesty International says the defendants, all accused of murdering officials in the town of Bossaso, were too young to be tried as adults, never given access to a lawyer and coerced into giving false confessions.

The rights group says that according to family members, the boys confessed to the killings only after being beaten, raped, subjected to electric shocks and burned with cigarettes on their genitals.

“These horrific allegations of torture must be fully and independently investigated and those found responsible held to account,” said Michelle Kagari, Amnesty’s deputy regional director for East Africa, the Horn and the Great Lakes.

The head of Puntland Military Appeals Court, Salah Liif, said the court does not force confessions and denied the allegations about the defendants being underage.

“Puntland Administration does not execute children and will never do that,” he told VOA’s Somali service. “It was a propaganda spread by elements playing human rights groups against Puntland.”

Al-Shabab gives defendants virtually no legal process at all. On the morning of May 6, residents of tiny Quar’a Madobe village were going about their business when al-Shabab militants ordered them to assemble. Dozens gathered to see the militants holding two men in civilian clothes at gunpoint.

“They brought the men in front of a tea restaurant, and told the residents they were captured enemy soldiers,” said a witness who spoke to the Somali service. One militant then recited a Quranic verse, he said, and two others used large knives to slice off the men’s heads, as those watching gasped and screamed.

A Somali National Army colonel identified the men as Mowlid Hussein and Ahmed Ya’qub, and said they were driving to the town of Jowhar to tend to family emergencies when al-Shabab intercepted their vehicle. The colonel said they were “off duty, uniformed and unarmed.”

On May 1, al-Shabab executed two other men — Ahmed Ibrahim Ragow, 29, and Yusuf Ali Bajin, 22 — for allegedly raping a girl and killing her brother in the city of Beledweye. One was shot by firing squad; the other was publicly stoned.

Hassan Shire Sheikh is chairperson of the East and Horn of Africa Human Rights Defenders Network (EHAHRD). In an interview with VOA Somali, he called for a complete stop to the executions.

“Carrying out executions abruptly won’t help the nation as it can cause the death of innocents,” said Shire. “The current executions represent retrogressive and unjustifiable [policy], as there is no evidence to suggest that the death penalty deters crime more effectively than other punishment.”

Sheikh Bashir Ahmed Salad, an influential cleric and the chairman of the Council of Religious Scholars of Somalia, said his council backs use of the death penalty, which describes as “a strong principle in our Islamic law.”

The cleric, who survived a car bomb in Mogadishu in 2013, is one of the few Somali clerics to publicly criticize al-Shabab’s extreme ideology and terrorist attacks. He supports any harsh sentences against the militant members.

“We generally believe that al-Shabab militant members disrespect human life, kill innocent people indiscriminately and destabilizes people’s peace and norm, so we support any iron hand dealing with them,” he said.