Drama as driver crashes car into a store on Waiyaki Way 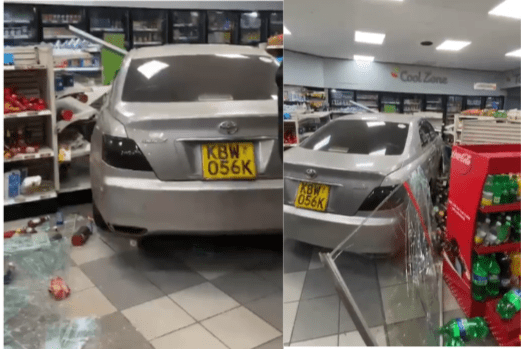 In what looked like a poorly directed film scene, a Kenyan driver on Saturday rammed through a convenient store at the Ola filling station-adjacent to the ABC place on Waiyaki Way-smashing into the glass entryway and sending juice boxes and attendants scurrying for safety.

A video shared widely on Kenyan social media showed the aftermath of the crash; floors littered with glass shards, soft drink splattered all over and attendants taking stock of the accident.

Witnesses said the driver of the Toyota Mark X of registration KBW 056K appeared drunk during the incident.

In the now viral video, decked in a navy blue jacket, the driver could be seen struggling to exit the vehicle which was sandwiched between shelves.

Watch the video below:

No one was hurt during the incident, but Kenyans on social media rallied their troops, demanding the swift arrest and prosecution of the rogue driver.

Another user, Aggrey Alwala wrote: “He thought was entering his garage”