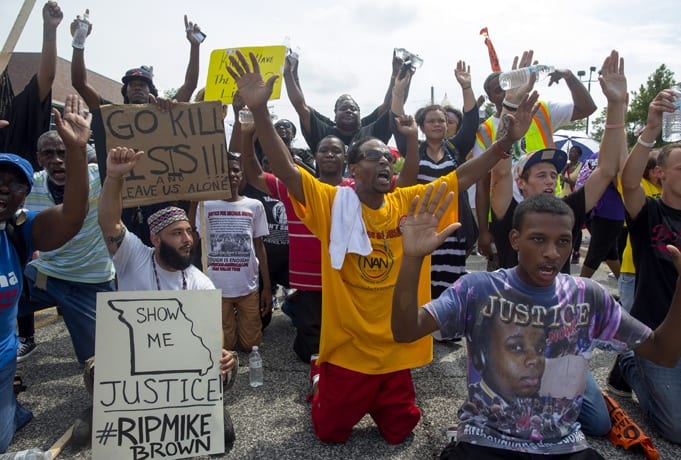 Demonstrators gathered in New York City’s Union Square on Sunday to mark the anniversary of the shooting death of an unarmed black teenager by a white police officer a year ago.

The peaceful demonstration was the second rally in New York on Sunday.

“We’re here to spread awareness of police brutality and mass incarceration, which exists in this country and unfortunately targets black and brown men and women,” Kate Flanders said.

“Back when Michael Brown was killed we had statistics saying that every 28 hours a person of color is killed by law enforcement,” said James Lane.

“And in the beginning of this year, there is a lot of independent resources out there that say it’s actually every eight hours a person of color is killed by law enforcement, so things have gotten worse.”

About 100 protesters in the borough of Brooklyn lay on the ground earlier in the day for 4-1/2 minutes to mark Brown’s death.

Brown’s shooting sparked months of protests, including incidents of rioting and arson while also giving rise to the “Black Lives Matter” movement that has pushed for better treatment of minorities.

The weekend’s events, by contrast, were largely peaceful affairs with police keeping a low profile.

A federal review found that Wilson broke no laws when he shot Brown. It however confirmed that the Ferguson police department had for years violated the rights of the city’s black population.