CS Kagwe on KEMSA scandal: ‘Not our job to arrest, prosecute’ 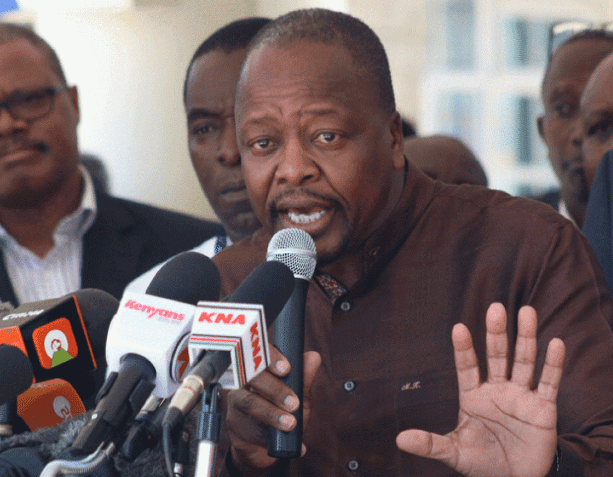 Mutahi Kagwe, the Health Cabinet Secretary, was tasked on Wednesday with explaining why there have been no prosecutions months after the KEMSA scandal broke.

Speaking during an interview with Inooro FM on Wednesday,  CS Kagwe said the Kenya Medical Supplies Authority is to blame because it purchased Personal Protective Equipment (PPEs) at exorbitant prices when the pandemic was reported.

“At the time, PPEs used to cost around Ksh.9,500 at Nairobi Hospital, and KEMSA was buying them for Ksh.9000. There were no PPEs in the country, so people would just sell to KEMSA at whatever price they set,” he explained.

Investigators could not go after those who supplied KEMSA, according to the Health Ministry’s boss, because it was the Authority’s responsibility to do due diligence before making purchases.

“You see, like today, Nyokabi is wearing a very nice sweater, it looks expensive; if you go to a boutique and the attendant sells you the same sweater for three times the price, do you really blame the seller or yourself for being silly?” CS Kagwe posed

The CS stated that he was the one who invited the anti-corruption commission and other agencies to investigate the matter after news of the scandal broke.

At the same time, he stated that his Ministry’s role is not to probe or investigate wrongdoing, but rather to ensure that other core services in the health docket are operational.

“The ministry does not prosecute, nor does it conduct investigations; the focus is on whether there are enough drugs,” “It is not the ministry’s work to arrest those who are said to be involved with corrupt people; we only deal with health,” said CS Kagwe.

The Cabinet Secretary stated during the interview that the PPEs held as evidence had already been released for use in the country.

“I wrote to the investigators and requested that they release the products for use; they were being held as evidence, so we asked them to take photos and release them,” he added.

The CS also expressed confidence in the new KEMSA board, stating that it has restored trust in the Authority both locally and globally.

“Boards change all the time; in this case, the new members are highly qualified for the task; for example, the chairperson, Mary Chao Mwadime, has been in supplies for a long time and has worked all over the world,” CS Kagwe explained.

In late April, President Uhuru Kenyatta appointed Mary Chao Mwadime to serve as chairperson of the Kenya Medical Supplies Authority Board for a three-year term

According to a gazette notice dated April 28, the change of hands took effect on April 30 and resulted in the revocation of James Kembi Gitura’s appointment as chairperson.

In the same Gazette notice, CS Kagwe named Capt. (Rtd) Lawrence Wahome, Robert Nyarango, and Terry Kiunge Ramadhani to the Board of Directors of the Kenya Medical Supplies Authority for a three-year term beginning April 30, 2021.