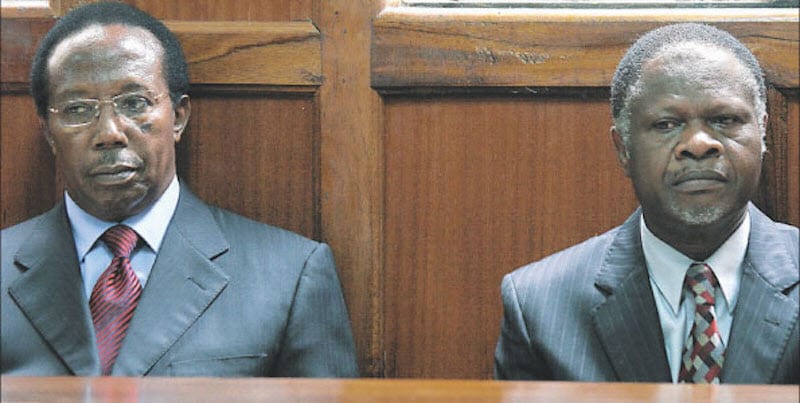 The Court of Appeal has adjourned a civil appeal case on the extradition of former Cabinet Minister Chris Okemo and former Kenya Power and Lighting Company boss Samuel Gichuru.

In a statement to media on Monday, the Office of the Director of Public Prosecution stated that Okemo’s defense counsel led by Mr Fred Ngatia had applied for adjournment of the case Monday morning on grounds that the DPP filed and served submissions late (July 21st, 2016) and without a list of authorities.

Ngatia requested for 21 days to file written submissions further arguing that the appeal be heard separately since Okemo’s case is clear and distinct from that of Gichuru and the charges are also different and distinct.

“Mr. Okemo has never been an employee of KPLC where Mr. Gichuru served as the Managing Director,” said Ngatia.

“In our view, the parties are not ready for today’s hearing because the written submissions were only served on 21 July 2016 and they were not accompanied with a list of authorities. For that reason we are implying to allow an adjournment sought to allow parties file and serve written submissions,” ruled the three bench appellate judges.

“Appellant to file submissions within 21 days and respondents also given 21 days to respond. Hearing dates to be given by the registry.”

The DPP, in his statement, said that he was ready to continue with the hearing of the two appeals noting that his position is that the two cases be heard together as they emanate from one judgment of the High Court and one ruling by the magistrate.

“It will be a waste of judicial time to hear the appeals separately”, said Senior Assistant Director of Public Prosecutions Edwin Okello.

In the Civil Appeal for the extradition of Samuel Gichuru to the Jersy, counsel Otachi for the appellant raised the issue of recusal of the bench as constituted (Hellen Okwengu, Martha Koome and Festus Azangalala).

In his oral submissions Otachi argued and indicated that Justice Martha Koome had given a dissenting ruling in a judgment that challenged the report by a ministerial committee constituted to look into the financial and procurement process at the Kenya power and Lighting Company in which Gichuru was adversely mentioned and sought to have his name expunged from the report.

Justice Koome gave a dissenting decision from the two who quashed the report and had Gichuru’s name expunged prompting the accused to accuse the judge of bias.

“The application is a side show and the judge has removed herself,” ruled the bench.