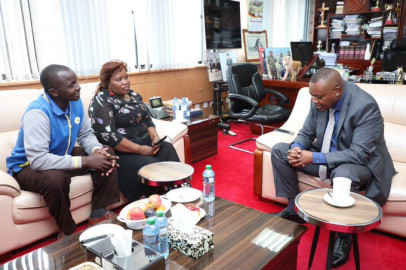 John Muthoni claimed he was let go by the sacco’s management after driving 14 students from Fred’s Grammer Mixed School to Sagana Police Station on November 19, 2021, after they failed to heed his warning and indulged in alcohol and bhang while en route to Nairobi from Karatina.

The news of his sacking went viral, prompting the attention of Kinoti who then summoned him to the DCI headquarters.

During their meeting, Kinoti once again lauded the driver for his actions, labeling it as heroic and courageous since drugs have destroyed the lives of many youth in the country.

Drug abuse among underage students, Kinoti said, could be one of the reasons why fires have been reported in many secondary schools across the country.

“Kinoti wondered how 2NK Sacco would result to such a punitive action instead of encouraging other drivers to emulate Muthoni’s good example,” the DCI said in a statement.

He encouraged Muthoni, who has since landed a driving job at the Nyeri County government, and Kenyans in general to continue upholding their moral values even if it may lead to them losing their jobs.