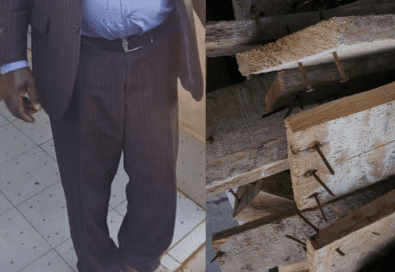 Police in Kericho have launched a manhunt for a Form Three student at the Ainamoi Secondary School in Ainamoi after he attacked the school principal Godfrey Rono and stabbed him in the head with a four-inch a nail.

The 18-year-old student swung a wooden plank at the principal on Wednesday, June 9th, driving the nail into the teacher’s head, according to Kericho County Police Commander Silas Gichunge.

According to accounts, the bloody attack came after the principal asked the student to pay his Ksh.7,000 fees balance.

According to the police chief, the principal had ordered the student’s locker to be taken away until the debt was paid up.

A day later, the student would ambush the principal as he was leaving the school, bludgeoning him with the wooden plank.

Students who witnessed the heinous assault raised the alarm, drawing the attention of bystanders who took the teacher to the hospital.

According to preliminary investigations, the boy who is still at large has a chequered history of threatening teachers; his behavior had been reported more than once.

The school head was treated and discharged after the incident.